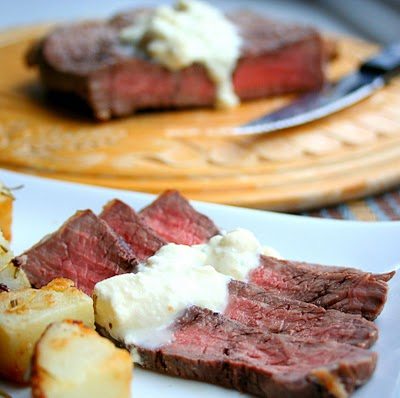 My computer is sick, so this is going to have to be a quick post before I take it in to the doctor. Figures that after the winter we had with all of the bugs going around, even my computer would catch a virus! It started behaving a little oddly on Sunday, and hasn’t gotten any better, even with a few attempts at cleaning it up to kill the virus. Whatever is wrong, it is way beyond my or my husband’s capabilities to care for it, so we need to take it to the professionals. Poor little computer. It’s no fun being sick!

But I thought I’d ask one more task of my poor computer before I take it in, and that is to tell you about the wonderful meal we had the other evening. I saw this idea on a post from Babble.com, by Angie McGowan of Eclectic Recipes and I instantly knew I needed to make it. But I also knew I needed to change it. For starters, the original recipe included flour and I wanted to avoid that. Secondly, I had a chunk of blue cheese in the fridge that needed using and would have felt wasteful if I’d gone out to by Gorgonzola when the two flavours are so close. Finally, the original recipe included no instructions on how to cook the meat. Knowing that london broil can be tough and stringy if not cooked well, I did my research before going ahead.

As it turns out, London Broil is not a cut of meat at all, but a method of preparation. But you can hardly blame me or anyone else who didn’t know this, since many grocery stores actually label certain cuts as london broil. They are often referring to top round roast or flank steak, but in the case of what I found at the grocery store, it was actually a shoulder steak. This can be a tough piece of meat indeed, so I proceeded to both tenderize and marinate it before I broiled. I also sliced it very thinly against the grain when I served it. I changed the sauce by foregoing flour and adding some white wine, and of course, I subbed in blue cheese in place of the Gorgonzola. 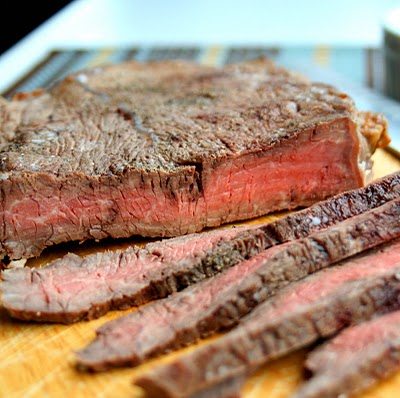 The Results: I am so glad I took the time to research what I was getting when it came to London Broil. Because the meat was lovely and tender and juicy, and I believe the preparation aided in that immensely. And the sauce was sharp and flavourful, a good contrast to the rich meat. My only issue was that the horseradish seemed kind of lost, and my husband agreed, but he did point out that the particular brand of horseradish we had was not very strong as it was. Next time I would add an extra tablespoon to the sauce to increase its presence.

Besides the advance preparation, which didn’t take much effort, this was an incredibly quick dish to get to the table. Broiling beef doesn’t take long at all, so it makes for a great weeknight meal, especially if you have tenderized the meat and put it in the marinade earlier in the day. It’s a great way to jazz up an inexpensive cut of beef. 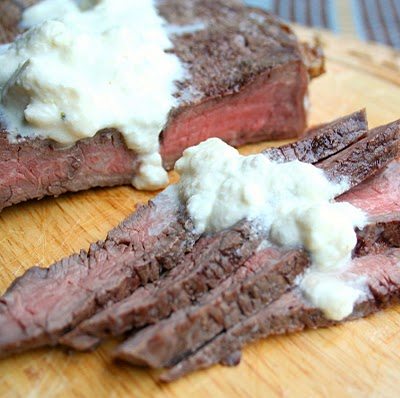 For the steak, tenderize by jabbing repeatedly with a fork on both sides. Season with salt and pepper. Combine lime juice and fish sauce in a shallow baking dish and add steak. Marinate for at least an hour, and up to 12 hours, flipping steak over once.

Preheat broiler, and broil steak 4 inches from heat source for 3 to 4 minutes per side, or until nicely browned. Move to a lower rack and continue to cook for another 2 minutes. Steak should be medium rare, or 130-140F on an instant-read thermometer.

Let rest 5 minutes before slicing thinly across the grain for serving.

For the sauce, melt butter in a medium skillet over medium-high heat. Add garlic and stir until fragrant, 30 seconds. Add wine and cook until reduced to a few tablespoons.

Add milk and cream and bring to simmer. Continue to cook until reduced by half. Stir in horseradish and cheese and whisk until cheese is mostly melted. Season with salt and pepper and spoon over sliced meat.