This keto friendly Sticky Toffee Pudding recipe features a tender, moist almond flour cake smothered in a rich sugar free toffee sauce. A heavenly low carb dessert with less than 7g total carbs per serving. And you can bake it right in your Instant Pot! 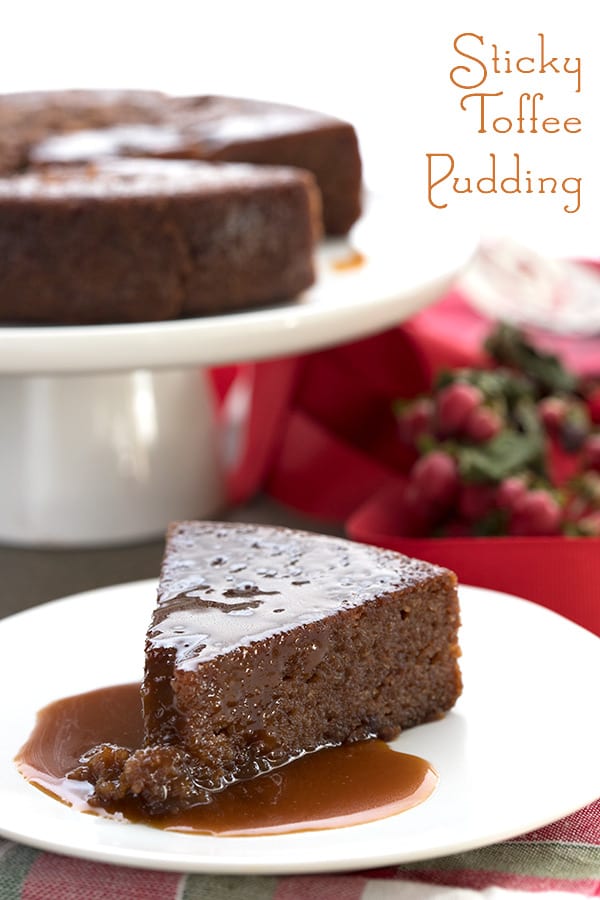 Oh looky, what do we have here? Would you believe me if I told you it’s a keto version of Sticky Toffee Pudding? For those of you familiar with your classic British desserts, prepare to have your minds blown by this deliciousness!

My own mind was blown. This sticky toffee pudding recipe may have just shot to the top of my favorite holiday desserts list. An incredibly moist, tender cake with a thick rich toffee sauce. And I cooked it in my Instant Pot! But don’t worry, I am including instructions for the oven as well. 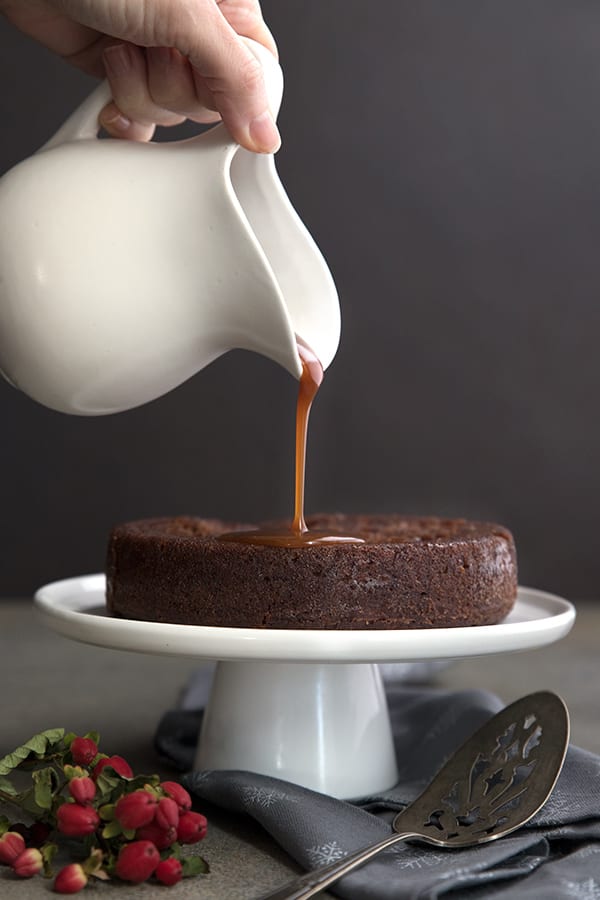 Never heard of sticky toffee pudding? I don’t care where you are from or what your traditions were growing up, you need to make this recipe now. I don’t mean in a few minutes, I mean RIGHT NOW!

What is Sticky Toffee Pudding?

It’s not pudding of the sort that most Americans would recognize. True to the delightful way the Brits use language, pudding can refer to dessert in general. It can also refer to a custard or a steamed cake. And sticky toffee pudding falls into the later category, although it can be baked or steamed.

Like many people, I’ve always assumed it was of British origin. But according to a couple of sources, its origins may actually be Canadian. Whoop whoop, another amazing dessert from my homeland! However, it was made famous by a hotel in the Lake District in the 1970s. 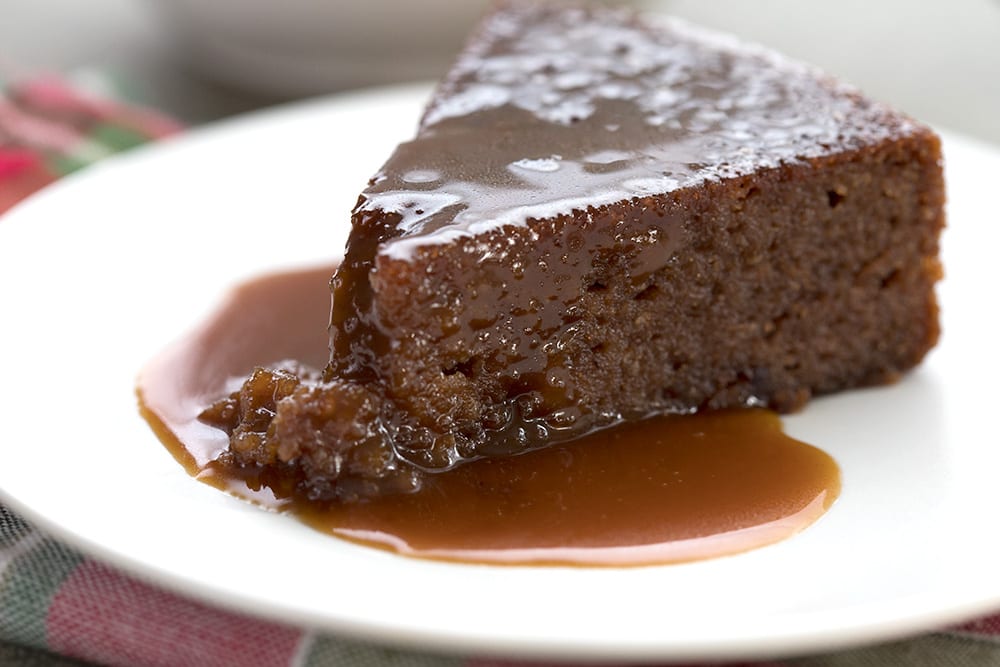 I don’t remember when I first heard of this delectable English treat but I do know that I wandered around London on my honeymoon, desperate to find some. I figured it would be sold in every restaurant and cafe but it was surprisingly hard to find. I did finally manage to get my fix at a little pub and it was just as good as it sounds.

The conventional Sticky Toffee Pudding recipe takes dates to help sweeten it. A lot of dates.

Dates are shockingly carby, did you know that? A single Medjool date has 20g of carbs. A cup of them has about 110g. GAH! That’s a shocking amount of carbohydrates for something that is not much bigger than a walnut.

I just got a toothache writing that. 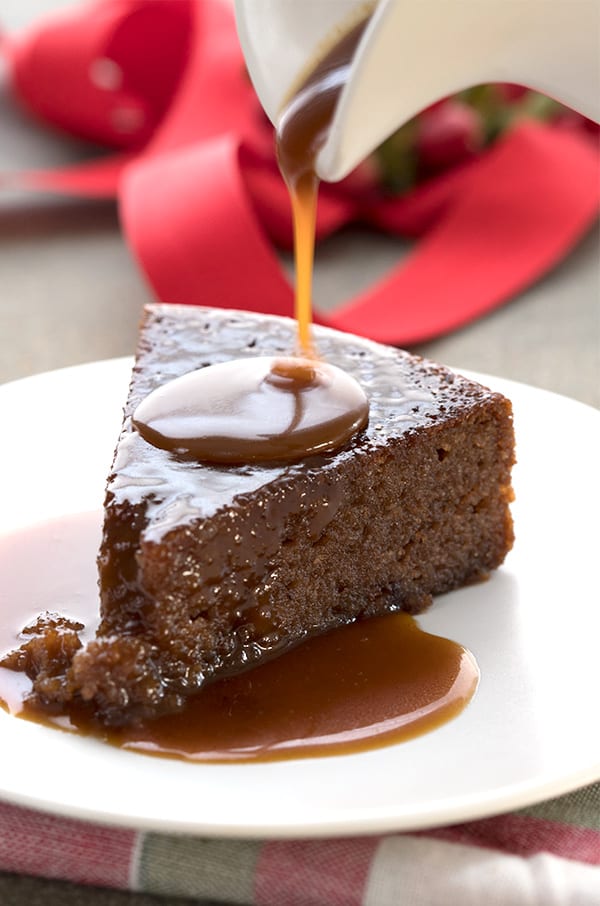 Date-Free: Obviously the dates had to go. I considered chopping up a single date to put into the mix but that would add over 2g of carbs per serving. So to get that same deep flavor, I used a little Yacon syrup, which only has about 12g per tablespoon. You don’t need to use this if you prefer not to.

I also added a little cocoa powder to deepen the color of the cake, but not so much that you can taste any chocolate flavor.

Steamed or Baked? When I was researching Sticky Toffee Pudding recipes, I found that most of them are baked. But it occurred to me that using an Instant Pot would give it that fantastically moist steamed texture.

If you don’t have an instant pot, you can also bake it in a water bath (instructions included in the recipe notes).

Two different sweeteners: I know you want me to tell you that the toffee sauce can be made with whatever you have on hand. But it can’t. You need a sweetener like allulose or Bocha Sweet (or possibly xylitol) to make the sauce gooey. Swerve works perfectly in the cake itself but would recrystallize too much to be used alone in the sauce.

So the sauce takes both Swerve and allulose or Bocha Sweet. This combination of sweeteners is ideal for gooey rich sauces like caramel. I usually use Bocha Sweet in my sugar-free caramel sauce but this time I used allulose and it worked beautifully.

To deepen the color and make it more of a toffee sauce rather than caramel, I boiled it longer until it was a deep amber. It was truly a thing of beauty!

To serve the Sticky Toffee Pudding: This is an incredibly moist cake and it’s not easy to remove from the pan in one piece. You can cut it into wedges in the pan, but if you want to take it out intact, you must line the bottom with parchment paper. That way, you can flip it out onto a serving platter (the bottom will become the top of the cake).

Let the cake cool completely before trying to serve, so it holds together a little better. The toffee sauce is best served warm, and you can warm the individual slices of cake gently before serving. 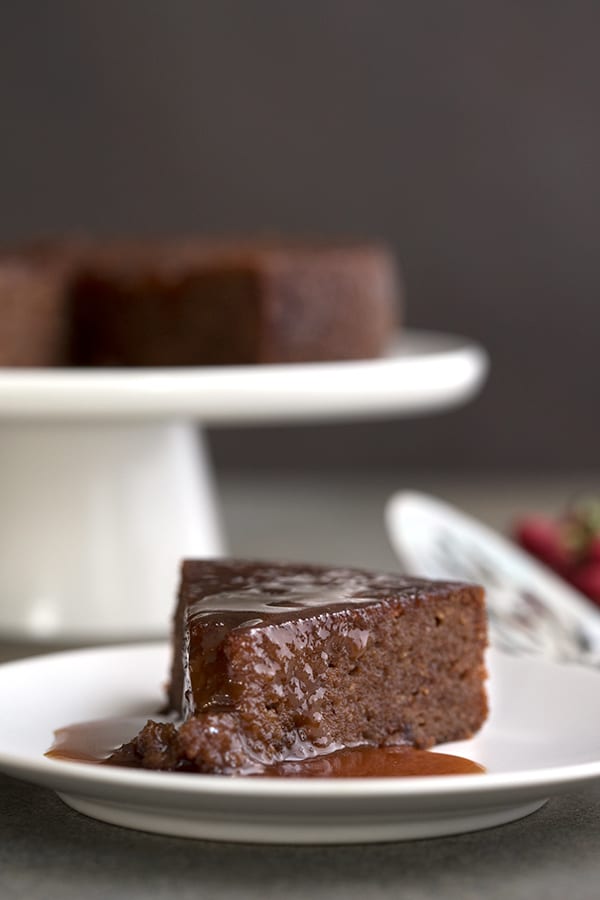 Ready to try my keto version of this classic dessert? You won’t regret it!

Grab a copy of my Best Keto Holiday Desserts Ebook for only $4.99 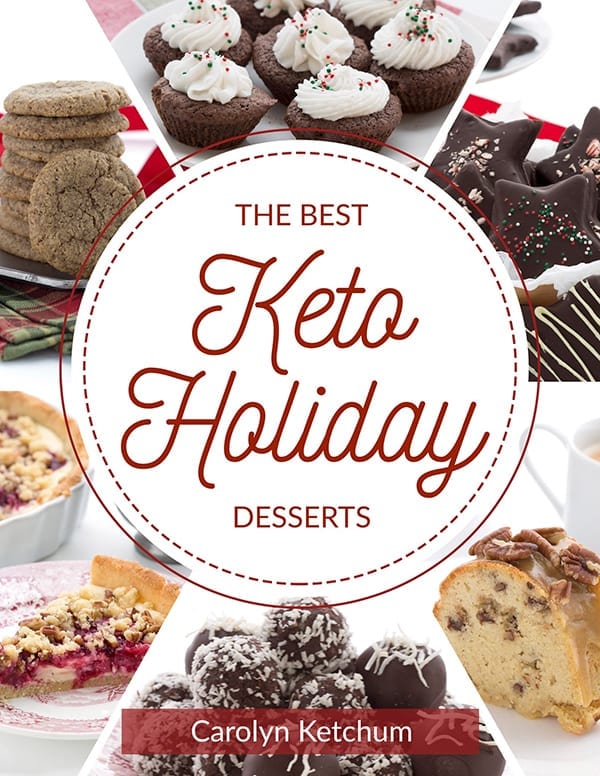 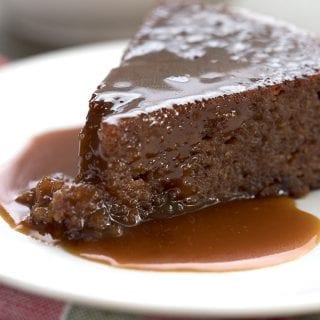 How to make Sticky Toffee Pudding without an Instant Pot: Preheat the oven to 350F. Proceed as directed and spread the batter in the prepared pan. Set the pan inside a larger baking dish and fill with enough hot water to about halfway up the sides of the inside dish.  Cover the whole thing lightly with foil and bake until set, about 40 minutes (keep your eye on it, it may take less or more time - this is a guesstimate on my part!). Remove the smaller dish from the water bath and let cool completely.
Nutrition Facts
Keto Sticky Toffee Pudding
Amount Per Serving (1 serving = ⅛ of cake)
Calories 351 Calories from Fat 296
% Daily Value*
Fat 32.9g51%
Carbohydrates 6.2g2%
Fiber 2.4g10%
Protein 6.6g13%
* Percent Daily Values are based on a 2000 calorie diet. 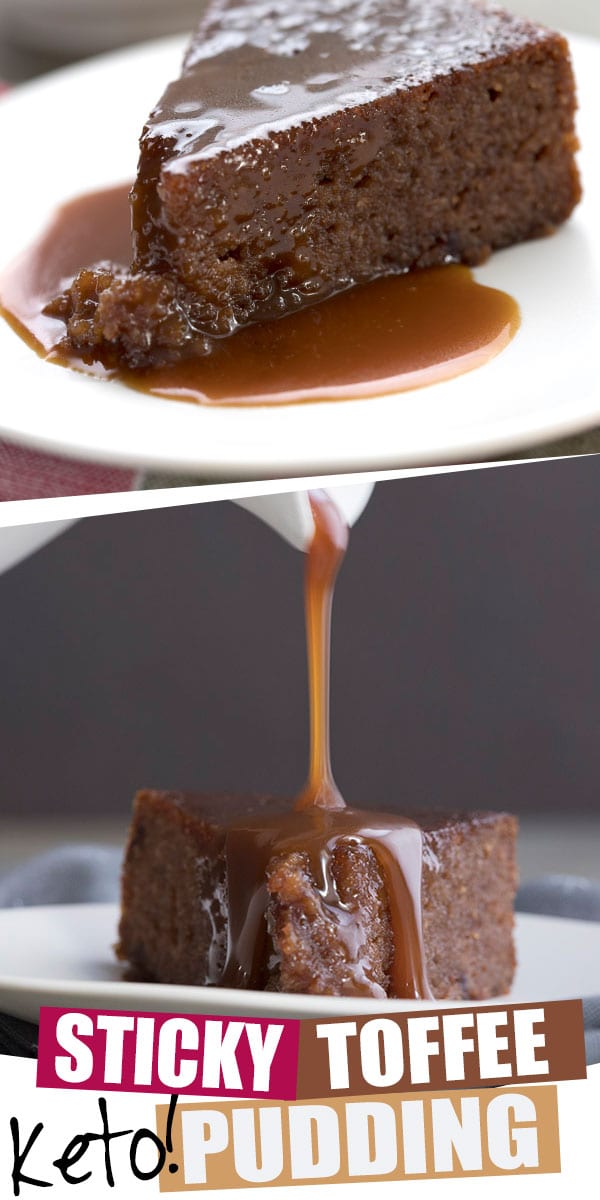