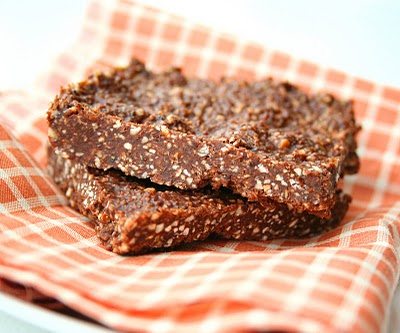 Tomorrow morning, I head down to the Cape with a few friends to run the Hyannis Marathon as a relay. My portion of the relay is 7 miles. A few weeks ago, I was really looking forward to this race, but right now? Not so much. For one thing, I am battling quite the sore throat at the moment. It feels like I’ve swallowed some daggers and they are sticking in my craw. It’s awful, and I just hope and pray it’s better by Sunday morning. But what also gets me down about the race right now is that my level of fitness isn’t anywhere near what it was when we signed up. The god-awful winter we’ve been having has made it hard to run outside and I find treadmills only so useful when training. Add to that the multiple bouts of illness for my kids and myself lately, and I’ve only managed to run three times in the last 2 weeks. I originally had a goal of completing my 7 miles in 56 minutes (an 8 minute pace) but now I have no goals beyond finishing. I can run 7 miles, but it ain’t gonna be pretty!

All of this is really neither here nor there regarding the recipe at hand, I just feel like venting a little! I was trying to create something akin to an energy bar here, as commercial versions aren’t really great for my blood sugars. I had it in my head to make something mocha-flavoured, so I tossed in a good amount of instant coffee powder. I don’t run without a little caffeine in my system. My husband can get up and go first thing in the morning, but I like to have my cuppa and a little food to fuel me up. So I figured that an energy bar with the caffeine built right in would be ideal. I also tossed in lots of ground nuts and seeds for energy, and some coconut oil and a bit of xanthan gum to hold it all together. I was using my own Chocolate Nut Energy Bars as a rough guide, but I was really making it up as I went along. 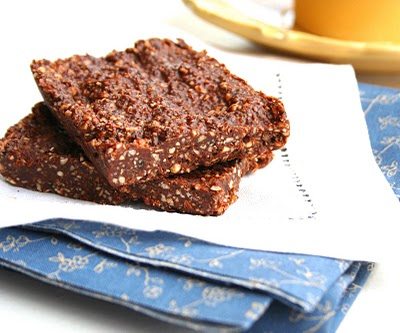 The Results: I am not entirely sold on these, I have to admit. They are not bad, I just find them a bit too rich-tasting and the mocha flavour doesn’t come through enough, despite the several tablespoons of coffee powder I added. I think the culprit here is the coconut oil. It is a very rich taste and it seems like it is overpowering the mocha. If I were to try these again, I’d cut the coconut oil with almond butter, but I simply didn’t have any at the time. But that is how I will write up the recipe for anyone who wants to give these a try.

The funny part is that my picky eater, my baby, loves them. LOVES THEM! I’ve been letting her munch on them after dinner and she always squeals with delight when she sees it. I really can never figure out what she’s going to like and what she’s not going to like, but I can get on board with her liking these! 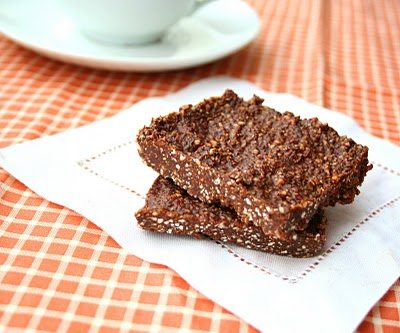 In a food processer, grind toasted nuts and seeds until fine. Mix in a large bowl with flax seed, cocoa powder, erythritol and coffee.

In a small saucepan over low heat, melt coconut oil and almond butter together, stirring until combined and smooth. Off heat, add vanilla and stevia extract.

Pour coconut oil mixture into the nuts and seeds and stir until it comes together. Press into an ungreased loaf pan and chill in refrigerator until set. Cut into 8 bars.

Makes 8 servings. Each serving has a total of 11g of carbs and 4g of fiber, but only 8g of carbs if you subtract erythritol.