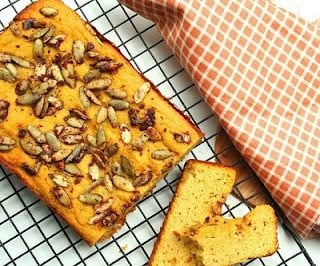 Apparently I have been downgraded. Yes, my friends, sad but true. I did not spend enough money at Starbucks over the past year to remain in the Gold Level, so I have been downgraded to the lowly Green Level. I blame my children. See, my children adore Starbucks, and it’s gotten to the point where if I pull into the parking lot, my almost-2-year-old starts clapping her hands and saying “YAY!”. Which means that if I go to Starbucks, I have to buy them all something. Well, of course, I can say no, and with the older two, it’s much easier to set the expectation that I am just getting coffee and we will be on our way. They are actually pretty good about it. But almost-2-year-olds are a tad harder to reason with. So I started avoiding Starbucks unless I was unaccompanied by children. Which until this fall was, um, never. I guess that’s one way to break a Starbucks habit!

One of the treats my children loved from Starbucks was the pumpkin bread. It’s not hard to imagine why…it’s very moist and flavourful and very, VERY sweet. When I bought it, I usually got one to split between the three of them. I’ve been promising to make them some since last winter, because I knew I could make a tasty version that was a whole lot better for them. But I was completely unable to find canned pumpkin in my area. I checked three different grocery stores AND Trader Joe’s, and there wasn’t a single can on the shelves. I figured that once school started and the Halloween stuff appeared, I’d be able to find pumpkin, but it still wasn’t there. Finally, in one store in the organic section, I managed to find a few rather pricey cans. Given how hard I searched for them, I decided that it was worth coughing up the dough so that I could finally make good on my promise. 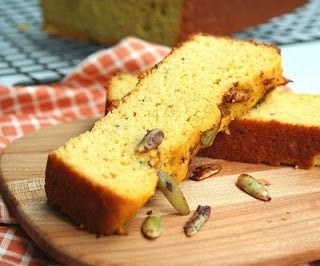 But by that time, my plans had changed. See, at first I was going to make them regular, albeit slightly healthified, pumpkin bread. You know, the sort made with sugar and flour and the typical pumpkin pie spices. But as the weather had turned somewhat chilly and more fall-like, I found myself in the mood for some pumpkin bread too. And of course, even a slightly healthified flour/sugar pumpkin bread won’t do for a diabetic. So I decided to take a stab at a low carb, gluten free version. And somewhere along the way, I don’t know exactly where, I decided to forego the typical pumpkin pie spices and use cardamom instead. I’ve fallen hard and fast for cardamom and love its exotic, warming flavour. It just seemed like it would be a great complement to the pumpkin in a fall-themed baked good. 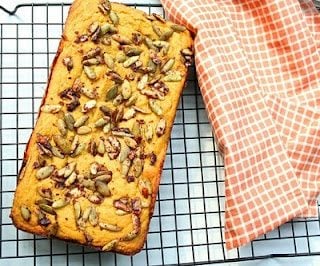 The Results: Well, I for one loved this. I loved the exotic kick of the cardamom and the way the actual flavour of pumpkin wasn’t hidden under a blanket of cinnamon, ginger and cloves. It was deliciously moist and made for a great breakfast with my coffee. It even fueled me through an 8.5 mile run last week (well, 2 pieces did, anyway). My son was not a fan, he was put off by the cardamom, but my oldest daughter loved it. I didn’t try it on my littlest child, as I didn’t want to waste it on her.

I do have one regret with this recipe, however. I severely underestimated the size of the pan and how much batter it would take to fill it up. Next time, I might completely double the amount of batter, because I’d love this bread in tall, skinny slices instead of short, squat ones. I am sure it would take a lot more baking to cook through, though. So I will write up the recipe as I made it, and you can do as you see fit. 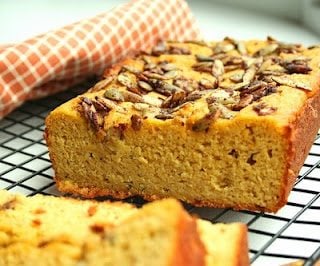 For the pepitas, melt butter in a medium skillet over medium heat. Add the pepitas, erythritol and cinnamon and toss to combine. Cook and stir until erythritol is melted, about 4 minutes, then remove from heat and set aside.

Add almond flour mixture to pumpkin and stir until batter is just combined. Spread in prepared pan and sprinkle with cinnamon pepitas, pressing lightly to adhere. Bake for 25 to 35 minutes, or until top is set and a tester inserted in the center comes out clean.

Let cool in pan for 20 minutes, then transfer to a wire rack to cool completely.