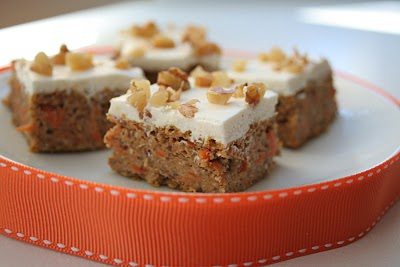 You know that children’s book, Alexander and the Terrible, Horrible, No Good, Very Bad Day? I had one of those days just last week. I had a baby who had to get four, count ’em, four shots at the doctor and who spent the rest of the day in a state of extreme crankiness. She refused to sleep, refused to eat and wanted to spend the entire day in my arms. I had a kindergartener who was in full on pester mode, seemingly incapable of playing by himself for even five minutes. I had lovely intentions for dinner, but realized too late that I had forgotten to defrost a key ingredient in time. And the best part? Oh, the best part was when, in my frazzled state, I backed the car into the garage door before it had fully opened. The car was fine. The garage door, not so much.

Despite all of this chaos, or perhaps because of it, I was also trying to create a new low carb treat for myself. I had seen a great-looking recipe for pumpkin squares and thought I could work a little low carb magic on them. The instructions for this recipe were quite poorly written, missing a step altogether and with no indication of what sized pan was needed besides it being “square”. It seemed like too much batter for an 8×8 square pan, so I did a google search and found a very similar recipe and used both of them as a guide. I replaced the flour with my go-to combo of almond meal and flax seed meal, and the sugar with erythritol and stevia. The rest I kept pretty much as it was. They smelled heavenly when they were in the oven and they seemed to bake quite nicely. I was looking forward to having these for dessert as a balm on the wounds from the rest of my day.

The Results: I would love to tell you that the results were so good, they raised my spirits and made up for the damage to my garage door. Alas, this is not the case. They are good, I will say, but they need some tweaking. They taste just as I imagined they would, but they seem undercooked. The resulting bars hold together just fine, but they seem overly moist . Had I been thorough enough to read the reviews on one of the original recipes, I would have seen that others found the same thing, so I don’t believe it’s a result of my low carb changes. Reviewers suggested baking it in a jelly roll pan and/or increasing the baking time by at least 5 minutes, and I do think that might have solved the problem with mine as well. The cream cheese frosting, however, was spot on and goes so very well with the pumpkin spice flavour.

Strangely, both my kids loved them just as they were, and up until now they haven’t been a fan of things with cream cheese frosting. I definitely think it’s a recipe worth keeping, with some of these modifications. So I will write up the recipe here with instructions for a larger pan and a longer bake time. If you try them and they work out (or don’t), let me know! I do plan to try them again myself sometime, but not necessarily in the near future.

For the bars, preheat oven to 350F and line a 10×16 inch jelly roll pan with parchment paper. Grease paper and sides of pan.

In a larger bowl, combine eggs, butter, pumpkin and stevia and stir vigorously until smooth. Stir in carrots.

Add dry ingredients to wet and stir until thoroughly combined.

Pour batter into prepared pan and smooth the top. Bake for 25-35 minutes or until center springs back when prodded gently with a finger. Cool in pan.

For the frosting, whip cream until it forms soft peaks. Set aside.

I sent these in to TorviewToronto’s Orange Food Palette Series. Head on over there and check out all the entries made with something orange. Such a fun event! 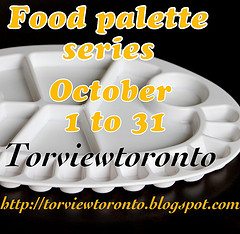