I’ve been a busy little bee this past week, but it’s not been in the kitchen as much as I would like. My son started kindergarten and we’re all adjusting to the new schedule of pick-ups and drop-offs. I have to say, this less than three hours a day of school puts a bit of a crimp in my two favourite hobbies of baking and running. I barely had time to crank out an eleven mile training run yesterday before rushing to pick him up, all sweaty and stinky. I am sure the other mothers were horrified at my appearance, but I tried to stand downwind of them so they didn’t have to suffer the indignity of my smell!

I did manage to make a couple of things that I want to share with you, and I am incredibly exicted about this one. So excited I can hardly contain myself. One might say ridiculously excited. And very, very proud of this little creation. Going by the title, it might not sound like much, because hey, who can’t make brittle or toffee? It’s easy, as long as you have a candy thermometer. One might say ridiculously easy. So why am I so excited?

It’s not the chipotle part, although I do think that bit is rather inspired (thanks to a recipe from Cooking Light). What I am really excited about is that this brittle is made entirely with erythritol. There is not an ounce of sugar in this thing! After my discovery with the pecan streusel bread that erythritol sort of carmelizes when mixed with butter over heat, I decided to experiment. If I exposed it to heat a little longer and got it to boil, could I get it to fully carmelize? Would it harden properly into toffee, like sugar does? Or would I blow up my kitchen trying? 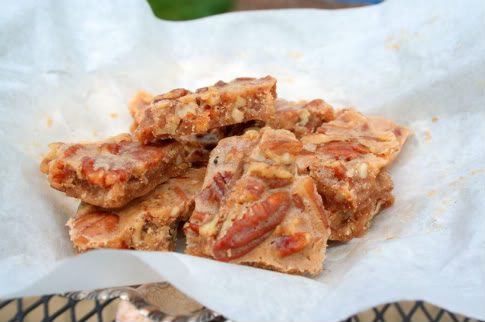 The Results: I think you can see from the pictures that it did indeed carmelize and harden into toffee. And for the record, my kitchen was not blown to smithereens (phew!). The brittle is delicious, and the heat and flavour from the chipotle is an unexpected twist. It’s not exactly like conventional toffee made with sugar, as the texture is a little grittier and it doesn’t get as hard and sharp. Also, there is a mouth-cooling sensation with erythritol that I hadn’t yet experienced as it’s usually lost among the other ingredients in my baked goods. Since this is pretty much just erythritol and butter, you definitely do get a bit of this cooling sensation. It’s not unpleasant and actually plays off the heat of the chipotle quite well.

With this discovery, I feel like the possibilities are endless. I already have some ideas of how to use this in other recipes (low carb toffee brownies, anyone?). If you’re not up for the spicy version of this toffee, just eliminate the chipotle powder and add in a bit of vanilla after taking the toffee off the heat. Or maple extract, now that would be delicious! If you want traditional English toffee, sprinkle it with chopped chocolate (high % cacao for lower carbs) after you’ve spread it in the pan, let the chocolate melt, and then spread over with a spatula.

One final word of advice…don’t eat too much of this on one go! Word on the street is that too much of any sugar alcohol can cause some tummy troubles. Erythritol is supposed to be easier on the tummy than other sugar alcohols, and I’ve never had a problem with it, but until you know how it effects you, you may want to go easy on it.

Line an 8×8 inch pan with parchment paper and grease paper or spray with cooking oil.

Melt butter in a medium saucepan over low heat. Once the butter is fully melted, add erythritol and turn heat to medium. Stir constantly until erythritol has dissolved and the mixture boils.

Stirring continuously, gently boil mixture for 10-15 minutes until it begins to darken and carmelize. If you are using a candy thermometer, it will register a bit above 300F when it’s finished. I found that the temperature rose faster than with traditional toffee, so watch it carefully. You may have to keep turning the heat up and down so it doesn’t cook too quickly.

Off heat, stir in pecans and chipotle powder (or vanilla extract). Pour mixture into prepared pan and let cool. You can place it in the fridge to cool faster if you wish, but once it’s hardened, it does not need to be refrigerated.

With your hands, break candy into chunks of whatever size you wish.