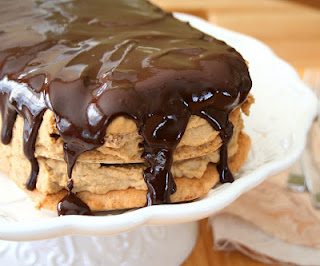 I can distinctly remember the first time I had a dacquoise. This is perhaps because I haven’t had all that many, and so the first stands out clearly. But I do know that it was something of a revelation to me. My father had flown out to see me at university around my birthday and took me to a lovely celebratory dinner, something far finer than I could afford on my student’s budget. I don’t remember much else about the dinner except for the delicious chocolate hazelnut dacquoise I chose for dessert. That a cake could consist of something other than traditional sponge and icing, could have crisp hazelnutty meringue layers instead of soft, flour-based layers, was such a wonderful discovery to me. It tasted like a ferroro rocher chocolate and I was in heaven. Even the name was poetic, that beautiful French word rolling off the tongue and signifying deliciousness.

That cake has never been all that far from my mind, quite honestly, as I am sure you can tell from my introductory paragraph. And I even attempted making one myself several years ago, before I knew I was facing a lifetime of diabetes. I had come across THIS recipe for a walnut dacquoise and I gave it a go, with one major change…I topped the whole thing off with chocolate ganache, letting it drip down the sides. It was a more difficult endeavour than I thought it would be. Getting even layers of the walnut meringue was tough for a person as impatient as I am, and I think I didn’t add enough sugar, as they deflated a little while baking. But the overall effect was utterly delicious. My mum and her husband were visiting from out of town and her husband said it tasted just like a Coffee Crisp chocolate bar. Those of you from Commonwealth countries will know that this was high praise, indeed! 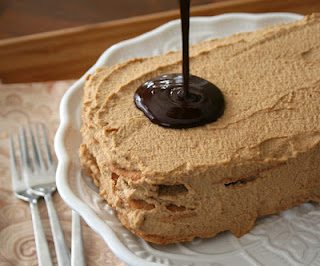 I’ve often thought that a dacquoise would make a great low carb cake, since it is already gluten free. I was a little unsure of the meringue layers and whether I could get them to crisp up properly. But now that there are powdered versions of many erythritol brands, I knew I could get a good low carb buttercream to sandwich between the layers, and of course, I love my low carb version of chocolate ganache. I was intending to make this for my own birthday which is in a few weeks, but I really wanted to give it a go sooner than that. 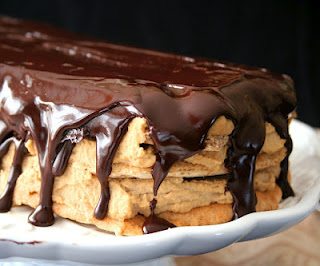 The Results: At first I wasn’t sure it would be a success, since the meringue layers still seemed so soft in the oven. But an hour with the oven off, and they were perfectly crisp. The buttercream has a nice strong coffee flavour, and using chocolate ganache on the top and letting it drip down the sides always saves me the trouble of having to try my hand a cake-decorating, perhaps my biggest weakness as a baker. My whole family loved this and happily gobbled it up for dessert. I will say, though that it is VERY rich and sweet. A small slice goes a long way, and I might almost consider reducing the amount of powdered erythritol in the buttercream.

As always when I use full strength erythritol, I chose to go with Swerve because it doesn’t seem to have the cooling effect noticeable in many other brands. One other little note…make sure your butter is properly softened, or your buttercream will lump up and won’t be smooth. 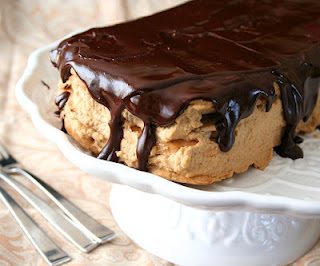 For the dacquoise, preheat oven to 250F and trace 3 9×5 inch rectangles onto parchment paper (I traced the bottom of a loaf pan). Place parchment on large cookie sheet.

Combine walnuts, 1/4 cup of the erythritol and arrowroot starch in a food processor and process until finely ground. Set aside.

In a large clean bowl, beat egg whites and cream of tarter until soft peaks form. Add the remaining 1/2 cup erythritol slowly until stiff, glossy peaks form. Beat in the vanilla, and then gently fold in the ground walnut mixture until fully combined.

Divide the mixture evenly among the traced rectangles and spread into an even layer. Bake until dacquoise layers are golden brown, about 1 hour (they will still be soft to the touch). Turn off oven and let layers continue to crisp up, about 1 more hour. Peel off parchment.

For the buttercream, combine instant coffee and hot water together in a small bowl and stir until coffee dissolves. Set aside.

In a large bowl, beat cream cheese and butter together until smooth. Add the powdered erythritol and beat until combined. Beat in coffee mixture and vanilla extract until combined, scraping down beaters and sides of bowl as needed.

To assemble cake, spread one or two tablespoons of the buttercream onto a serving platter or cake plate, and lay the first layer of dacquoise on it to help adhere it to the plate. Spread 1/3 of remaining buttercream on first layer. Repeat with remaining dacquoise and butter cream. Refrigerate for at least two hours to allow buttercream to set.

For the ganache, melt butter, chocolate and powdered erythritol together in a small saucepan over low heat. Stir in cocoa powder, vanilla and stevia and whisk until smooth. Remove from heat and let sit 5 to 10 minutes until glaze is thickened but still pourable. Pour chocolate glaze over the top of the cake and spread with a knife or offset spatula, pushing to the edges and letting it drip down over the sides. Let set 30 minutes before serving.

Slice carefully with a sharp knife dipped in hot water, to allow for even, clean slices.