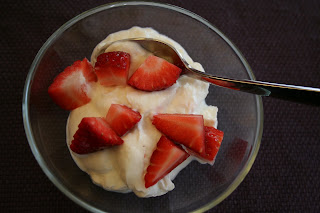 Ask me what I did this weekend. Go on, ask me! Well, let’s see. I did some grocery shopping, had some friends over and…oh yes, that’s right, I made yogurt in my crockpot. No, really, I did! And it’s good. Really, really good. And easy. Really, really easy. I may never buy store-bought yogurt again.

I must give credit where credit is due. I never would have thought of making my own yogurt, but we eat so much of it that my husband wondered aloud one day whether we could make it ourselves. I rather shrugged it off, assuming it would be either quite difficult, or that it would involve a pricey piece of kitchen gadgetry. Now, let’s be clear, I have nothing against kitchen gadgetry, but we already own quite a bit of it. There are the standard kitchen workhorses, such as my KitchenAid stand mixer (oh, how I love you!), and our KitchenAid food processor (second in my heart only to the mixer). And then there are the myriad single-purpose items that live in the basement, take up space, and don’t see a whole lot of use (Froth and Sauce, anyone?).

But I guess the idea stuck with me and out of curiousity one day, I googled “homemade yogurt”, expecting all recipes to end with “and process in yogurt-maker according to manufacturer’s directions”. To my surprise, there were a number of sites indicating how to make yogurt without a yogurt-maker. As it turns out, all a yogurt-maker really does is incubate the milk/live culture mix at the right temperature until it thickens and the cultures multiply. There are other low-tech ways to do this, the easiest of which is in your crockpot. I found the best directions for it from a website called A Year of Slow Cooking, a really great blog with wonderful ideas and recipes for your slow cooker. I combined those directions with information from the Fias Co. Farm website about adding powdered milk to get a thicker consistency.

Now for the best part: several websites even had tips for making greek yogurt. Words cannot describe how much I love greek yogurt. This thick, creamy stuff saw me through the hard times of battling gestational diabetes, as its higher protein and lower carb content made it a perfect snack. I became a Chobani devotee, eating their plain yogurt with berries and nuts every day. I feel I owe them a debt of gratitude for their product. However, this won’t stop me from making my own and no longer buying theirs!

The results: I wasn’t certain it would work, especially since I accidentally set my crockpot to high when it was supposed to be on low. But it did work, and how! It is a lengthy process, but it take very little actual effort. The regular yogurt is almost identical in taste and consistency to store-bought plain yogurt, and my husband has been having it every morning for breakfast. Even the kids were diggin’ it with some strawberries and a little sugar. But the greek-style…oh, this is heavenly! I’d say it’s even better than my beloved Chobani – it’s a little less tangy, and wonderfully creamy and thick.

I am still reeling with astonishment at how well this worked, how little effort it took, and how we can now afford to support our family yogurt addiction in style. Chobani, you were good to me, and you will forever have a special place in my heart. We had a great relationship while it lasted. It’s not you, it’s me. I’ve discovered crockpot yogurt and I just can’t go back. I know you will make some other gestational diabetic a very happy woman. Unless, of course, she too discovers crockpot yogurt.

Turn crockpot to high for 2 ½ hours (the original directions said low, but this worked so well for me, it’s what I will continue to do).

Unplug crockpot and let sit for 3 hours. Do not lift lid as this will allow heat to escape.

After three hours,scoop two cups of the milk into a bowl and whisk in storebought yogurt. Put this mixture back into the crockpot and stir to combine. Replace lid.

Wrap the whole, unplugged crockpot in a large, thick bath towel and leave to incubate for 8-12 hours.

Ta da! Homemade yogurt. And for the next go-round, you can use ½ cup of your own yogurt as the live culture starter.

For Greek Yogurt: Line a sieve or colander with coffee filters and place over a bowl. Pour in yogurt and let sit on counter or in fridge for 3-4 hours to drain.

Notes: The original batch made about the equivalent of two large containers of store-bought regular yogurt. When making greek yogurt, you get a lot less as you lose significant volume when the liquid (whey) drains out.