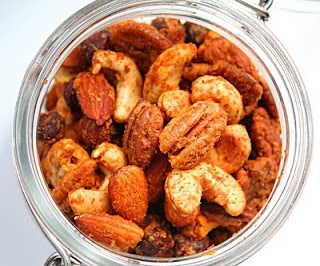 I will confess that I am very much a fair-weather sports fan. And it really has nothing to do with whether a team I like is doing well or doing poorly and everything to do with food. Take, for example, my devotion to the Maple Leafs during my four years at the University of British Columbia. Was I really that much of a Leafs fan? No, I simply had an ongoing bet with my best friend, a boy who lived and breathed the Vancouver Canucks, for a steak dinner every time our two teams played each other. And the Super Bowl? Sure, I will watch it every year, but only really as an excuse to eat an excessive amount of Buffalo wings. The only time I ever really feel worked up about a sport is when Canada plays in the Gold medal round of Olympic hockey. That’s when I get all sweaty and sick to my stomach with nerves, because let’s face it…my national pride is on the line.

Buffalo wings are a food I’ve only come round to in the past five years or so. I’ve always loved chicken wings, but I preferred other flavours more than the spicy tangy hot sauce. But I seem to have developed a taste for them and I think the fault lies with my husband. He loves almost anything Buffalo-flavoured. Buffalo wings, naturally, and the hotter, the better, but also pizzas and sandwiches and snack items that contain similar flavours. A particular favourite are the Buffalo-flavoured pretzel nuggets. He doesn’t really like pretzels on their own, but add some hot sauce and call them Buffalo-style, and you will make him a happy man. 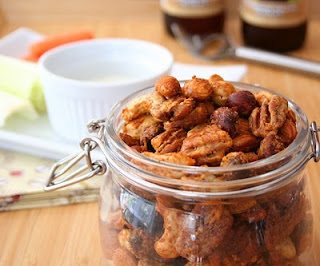 I haven’t made any roasted nut snacks for a while, so the time was ripe. I wanted a savoury snack, and making them Buffalo-style just seemed like a natural fit. So natural that I actually expected to come across a ton of recipes for similar things. I wanted to get an idea of how to make the buffalo flavouring stick, so I did a google search, which yielded surprisingly little information. I know it’s not a completely original idea, as there are a number of companies out there that make them. But shockingly, I couldn’t find any recipes for homemade. So I had to go it alone. In the end, I decided simply to toss the mixed nuts with butter and hot sauce, just like wings would be. Then I added a few extra spices, like garlic and onion powder, a bit more cayenne, and some salt. And into the oven for roasting. 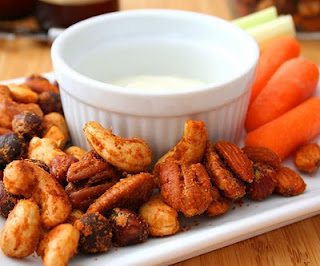 The Results: I’m not going to lie to you…these are fantastic! Really, if you like Buffalo-flavoured things, these are a must-try snack. They are simple to make, so it’s easy to whip up a batch for a party or on game-day. Or just for having around the house for snacking. My husband couldn’t stop picking at them when he came home from work. I kept running my finger around the bowl where I’d tossed them together, the sauce was so tangy and good. And since they were nuts, instead of chicken, I didn’t run the risk of giving myself salmonella by doing so!

I will tell you a few things to keep in mind. First, skip putting in any hazelnuts – I only put some in my mix because I was short on almonds. But they don’t have the right flavour for the buffalo seasoning. They aren’t awful, just not as good as the other nuts. The pecans are very good, because they impart a kind of sweetness that goes surprisingly well with the hot sauce.

Also, if you like your Buffalo-flavouring to be hot, put in extra cayenne. I would definitely put in more next time. The sauce tasted quite spicy after I’d mixed it all together, so I thought there was enough. But in the roasting process, some seems to fall off the nuts so they lose a bit of heat. They are still really great, but not quite as hot as I would like them. 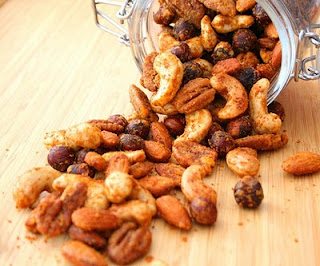 Preheat oven to 350F and line a baking sheet with parchment.

Mix all ingredients together in a medium bowl. Spread in a single layer on prepared baking sheet and bake 8 to 12 minutes, stirring occasionally.

Let cool on pan and serve.