The creamiest keto pumpkin cheesecake ever and it’s baked right in your Instant Pot! Easy to assemble and it cooks much faster than a traditional cheesecake. Rich pumpkin spice flavor and a sugar-free almond flour crust. 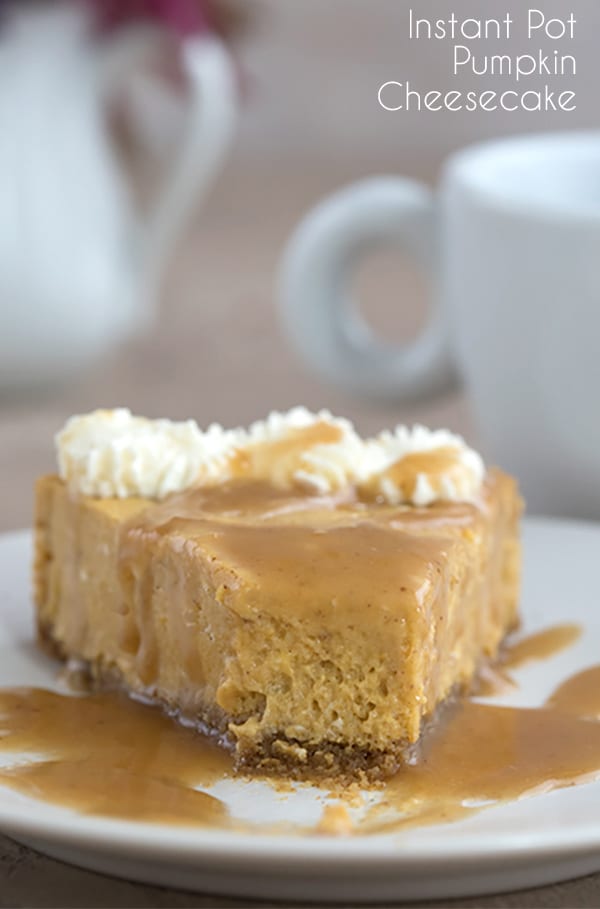 I’m all in now on pumpkin spice. I am fully committed to the flavor of the season. I can’t seem to get enough. And while I already have several keto pumpkin cheesecake recipes, I am now coming out with this gorgeous Instant Pot Pumpkin Cheesecake.

My Instant Pot made its way up from the storage shelves in the pantry recently. I had put it away for most of the summer, preferring my grill and my stovetop for warm weather cooking. But it is a very useful kitchen gadget, especially when it comes to comfort food season.

It’s not ideal for everything but it can significantly cut back on cooking time for soups, stews, and braised meats. A couple of my favorite recipes include the Instant Pot Loaded Cauliflower Soup, the Creamy Keto Salsa Chicken, and the easy Instant Pot Pulled Pork.

But one of the things I like cooking most in the Instant Pot? Cheesecake. It’s amazing, how creamy and rich it is. Something about that intense steam cooking is ideal for a dense and rich recipe like cheesecake. 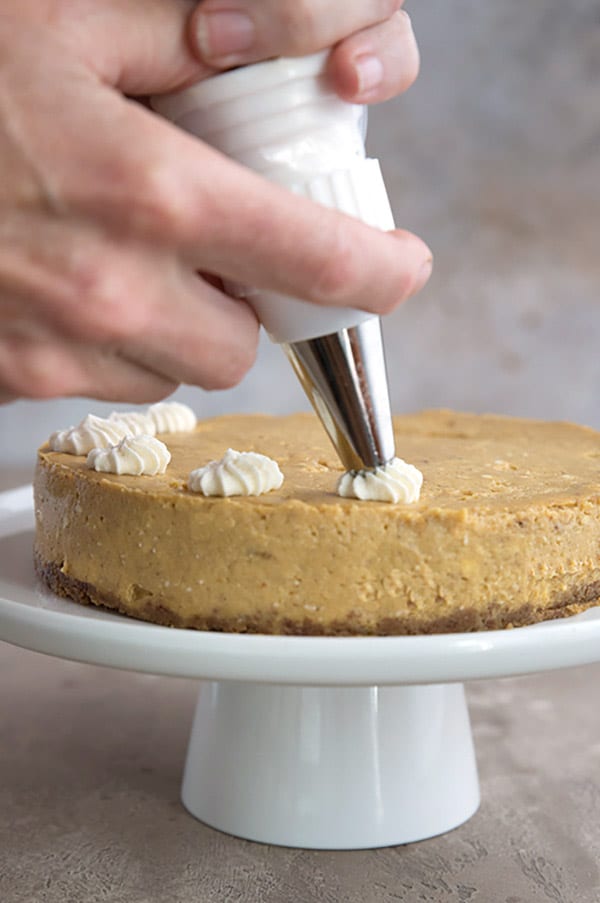 How to cook cheesecake in an Instant Pot:

This keto pumpkin cheesecake is my third instant pot cheesecake, but trust me, it won’t be my last. My first attempt was another seasonal favorite, my Keto Pecan Pie Cheesecake. I was blown away by the remarkably creamy texture, so I quickly followed that up with an Instant Pot Lemon Cheesecake and was met with the same creamy consistency.

To bake a cheesecake in an Instant Pot rather than an oven, you need a few special items:

Beyond that, you really just need the typical ingredients for any low carb cheesecake. Keep in mind, you use less of them because it results in a smaller cake.

For this Instant Pot pumpkin cheesecake, I used almond flour for the crust (Bob’s Red Mill, of course!), with some sweetener and some spices.

I did something a little different with the filling this time, as I had some mascarpone that was nearing its expiration date. So I beat that with some cream cheese, some pumpkin puree, and some pumpkin pie spice. You can use all cream cheese, if you prefer. Either way, it will be amazing! 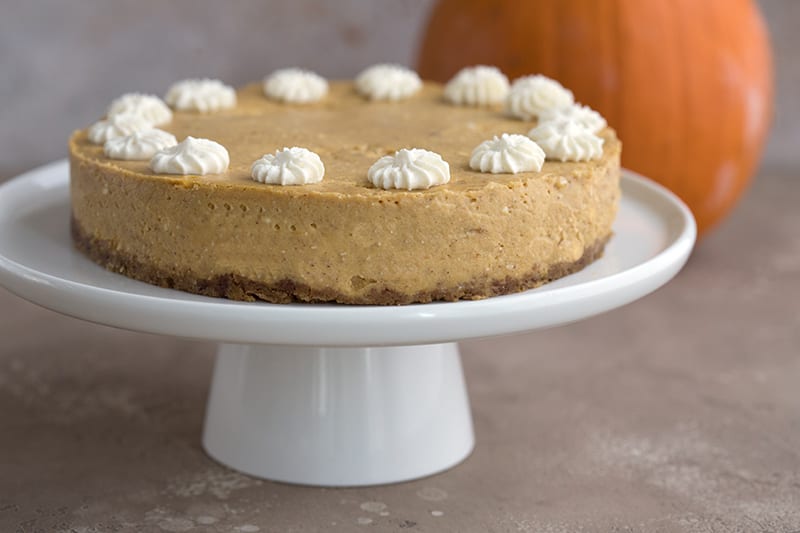 How to garnish your Instant Pot Pumpkin Cheesecake

You know pumpkin and caramel go together like peanut butter and jam, right? So you’ve got to make my sugar-free caramel sauce to drizzle over top.

But a little bit of lightly sweetened whipped cream is lovely too. I am the worst cake decorator, to be honest, but some whipped cream and a star shaped decorating tip, and even I can make a beautiful cake.

Can you make Instant Pot Pumpkin Cheesecake ahead?

You bet! Like any cheesecake, this can be refrigerated for up to 6 days. Keep it tightly wrapped in plastic wrap and store in an airtight container to keep it from drying out and from picking up other odors from your fridge.

If you want to freeze the cake, don’t put any caramel sauce or other garnish on it. Again, wrap it up tightly to keep it as fresh as possible, and it can last up to 6 months.

If you’re worried about ruining the cake before wrapping it up, one trick is to flash freeze it first. Simply place it on a cookie sheet in the freezer, unwrapped, until it’s frozen solid (a few hours). Once it’s completely firm, you can wrap it easily without crushing or smooshing. 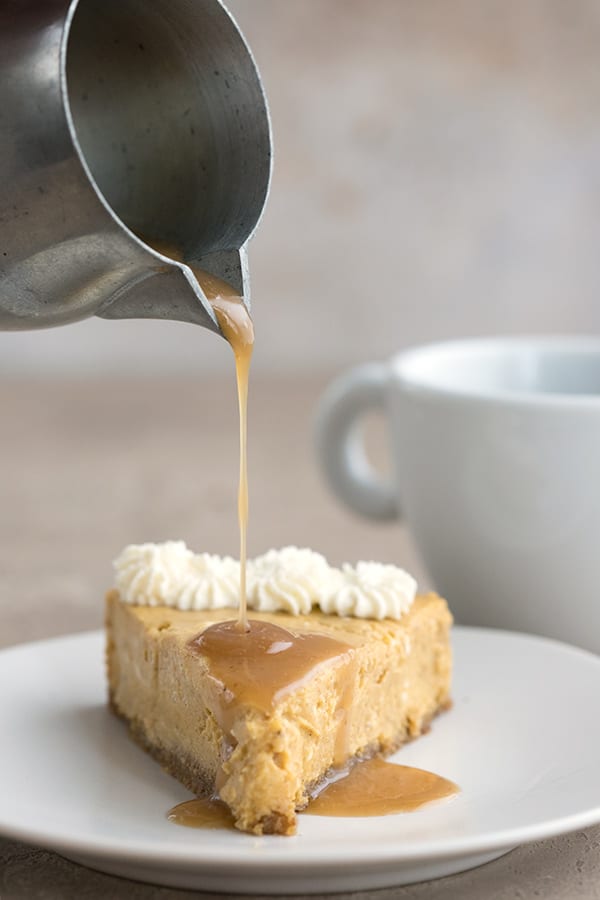 Can you make this Keto Pumpkin Cheesecake in the oven?

Absolutely. While I haven’t tried this particular recipe in the oven, here are my best suggestions: 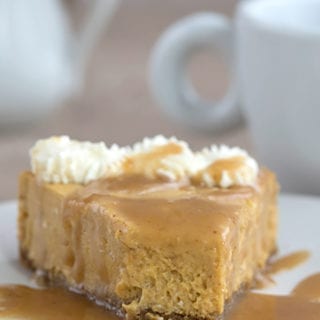 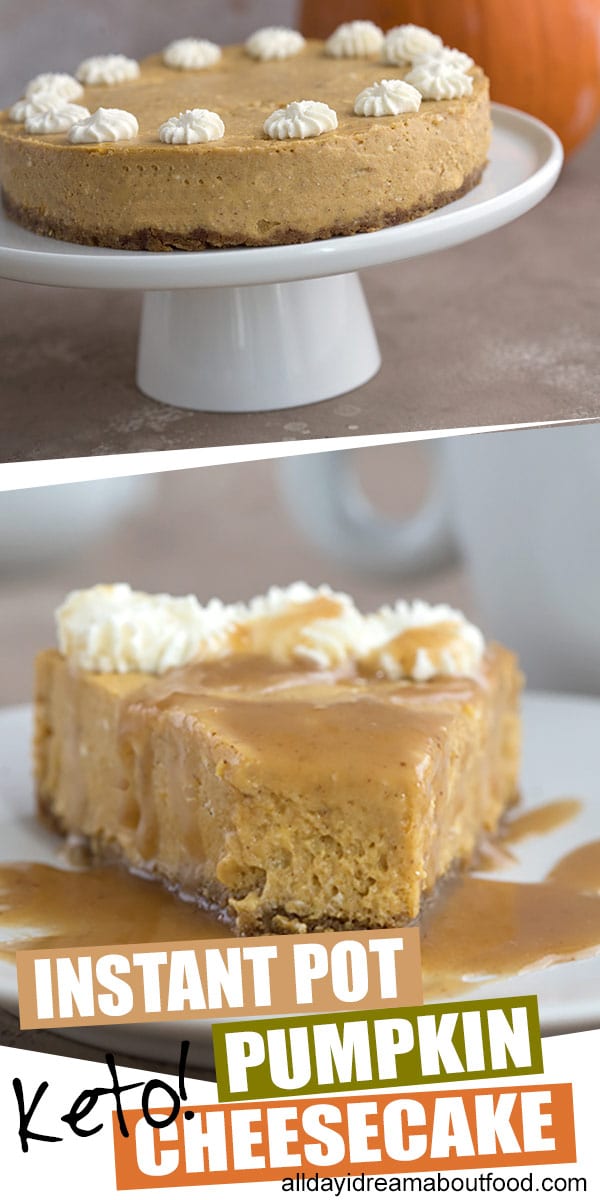