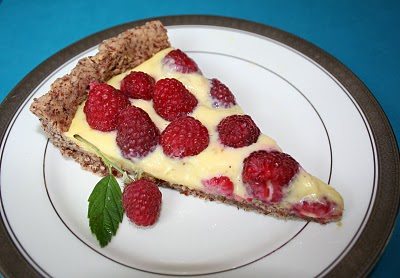 Were you a longtime Gourmet magazine subscriber? Were you surprised to hear that this bastion of American cookery was going under? Did you mourn its passing a little, or perhaps even a lot? Did the Bon Appetit that arrived in its place to fulfill the rest of your subscription seem like a hollow substitute? If you said yes to any of the above, you should know that you are in good company!

There was a time when I preferred Bon Appetit over Gourmet. I subscribed to BA for many years, but finally let my subscription lapse when I noticed that the same recipes, with only slight variations, seemed to be coming round again. Gourmet had always seemed slightly hoity-toity to me, or at least what my younger self perceived to be “hoity-toity”, and less focused on the actual recipes. A few years ago, however, my parents-in-law gave me a subscription to Gourmet for Christmas, and I suddenly realized how much I enjoyed reading it, recipes and articles alike. So I was sad to see it go under, and found that I no longer enjoyed the Bon Appetit that came in its place quite as much as I used to do. It may be that both magazines had changed, or maybe I had just come to appreciate the hoity-toity a little more as I have aged. Who can say for sure?

This recipe isn’t from either magazine, being that Gourmet and Bon Appetit don’t exactly do low carb. One might think that reading cooking magazines would be painful, now that I have had to overhaul my diet. Strangely, this is not so. I find plenty of inspiration from conventional recipes and I always enjoy salivating over the pretty food photos – figuratively, and sometimes literally. So the inspiration for this current recipe is from the June 2010 BA issue that I received to finish out my Gourmet subscription. I am sure the original is fan-freakin’-tastic and if you want it, you can find it here. I, however, wanted to attempt a low carb version of this tart with some of the amazing raspberries I picked last week with my girls. And as if I needed any more justification, it turns out that raspberries are lower in carbs than either blackberries or blueberries. Lucky me! 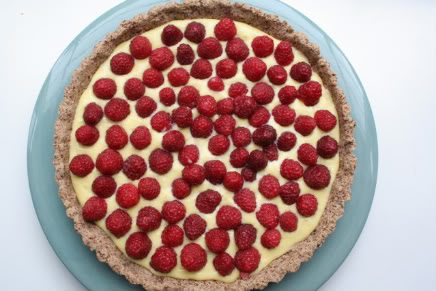 The Results: I’m afraid that I have to give this recipe mixed reviews. A dessert should be more than the sum of its parts, but in this case, one part, namely the crust, failed me. Or I failed it. However you want to see it. It looked and felt the part, molding to the pan and not sliding away from the sides during baking. However, it lacked any flavour whatsoever and was just a vehicle for getting the lime curd and berries to the mouth. It should have been sweeter and added its own dimension to the whole dessert, but it did not. Perhaps a little more sweetener and some vanilla extract would have saved it. Or perhaps I should seek out another way of making low carb tart crust.

The lime curd, however, was divine. This was actually the part I was most worried about when dreaming up this recipe, as I wasn’t sure a curd would set without sugar. But set it did, and the flavour was spot on – sweet but with a citrus-y tartness that went so well with the juicy raspberries. I’d make this part again in an instant, and I’d venture to say that the curd with some berries on top would make a tremendous dessert on its own. No crust need apply!

But if you do happen to know of a good low carb tart/pie crust recipe, please share! I know I will need one for future endeavors.

For the curd, whisk eggs, egg yolks and erythritol in a medium bowl to combine. Stir in lime juice, lime zest and stevia. Set bowl over saucepan of barely simmering water, making sure not to allow the bowl to touch the water).

Whisk constantly until mixture thickens and an instant-read thermometer registers curd at about 170-175F. Remove from heat and add butter. Let stand 1 minute and then whisk until blended and smooth. Press plastic wrap directly onto surface of curd, covering completely. Chill completely in refrigerater, at least 4 hours.

For the crust, preheat oven to 250F and grease a 9-inch tart pan with removable bottom.

Mix dry ingredients in a medium bowl to combine. Add egg whites, butter, stevia (and vanilla, if using) and mix until dough comes together. Add a little more almond meal if dough is too sticky to work with.

Press dough into bottom of pan and up the sides. Bake 45 minutes, or until set and light brown around edges. Cool completely.

Serves 10. 14g total carbs per slice, but only 7.1g if you subtract erythritol.