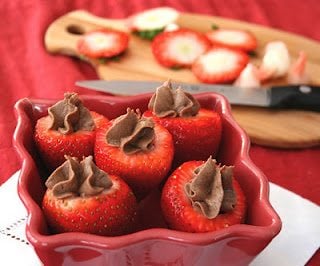 It’s time for the October edition of the Secret Recipe Club, and I am really excited about this one. To be fair, I’ve been excited about all of them, since I love finding and exploring new food blogs. This time, I was assigned to a blog called Food For Thought, written by Dana. I did my usual tour of the blog, looking through the archives and searching for recipes that suited my taste and style. I spotted the recipe I wanted to make almost immediately, but there was so much to see on Dana’s blog, I didn’t want to miss anything. Dana has been writing Food For Thought since May 2010 and she has a wonderful collection of recipes, so I encourage you to head on over and check it out.

But yes, I was immediately taken by her Mexican Hot Chocolate Covered Strawberries and knew almost immediately that it is what I would make for the October Secret Recipe Club. Dana developed this recipe as an entry into a chile recipe contest, and I have to say, I find the idea so smart. It’s simple and straightforward, and yet has an interesting twist from regular chocolate covered strawberries. I also happen to adore chocolate with cinnamon and chipotle in it, so that was a huge selling point. And I knew I could easily make the recipe suitable for someone on a low carb diet. 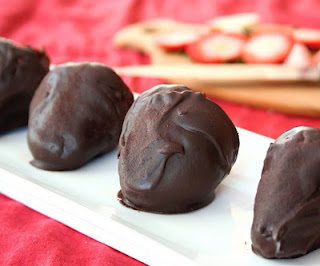 At first, I intended to make them as she did, just covering the strawberries in the spiced chocolate. But then I started to conceive of them as part of a larger dessert. My 10th anniversary was coming up and my mind was running to some fairly elaborate creations. I’d also been obsessing about the pastry cream from my Boston Cream Pie, and wondering about incorporating a chocolate pastry cream into something. When the day of my anniversary dawned, however, I found myself with a number of other tasks on hand and little time to prepare an elaborate dessert. So I simplified. I’d seen a number of posts from other bloggers on stuffed strawberries and I thought that would be a great way to incorporate pastry cream into my post for the Secret Recipe Club. Why not stuff the strawberries with chocolate pastry cream AND cover them with chocolate, and have everything flavoured with a touch of cinnamon and chipotle?

I will say, it took a few tries to figure out how best to do this. I wanted to keep the hulls intact on the berries, for both looks and as a way to hold onto the berry. So my first attempt included trying to cut out a bit of the bottom of each strawberry and stuff them that way. But that only allowed for the teensiest but of pastry cream to get inside the berry. In the end, I cut off the hulls and cored the center out of each strawberry. Since most big strawberries have a somewhat hollow center, this allowed me to get a nice amount of pastry cream into each. It definitely made it trickier to then cover each berry in chocolate, but with a fork and some toothpicks, I think I managed in the end. It also makes them a little messier for eating, as you don’t have the hull to hold onto and you do get chocolate on your fingers. But I suppose there are worse things in life! 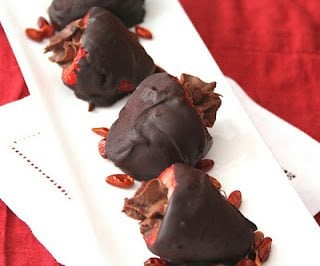 The Results: These were so, SO good, and a lovely little treat with which to celebrate my 10th wedding anniversary. They had a nice kick of heat that was complemented by the cool sweetness of the strawberries themselves. The chocolate pastry cream was incredible, I could have eaten the whole bowl by itself, quite frankly. It was fairly spicy on its own and at first I thought maybe I’d put too much chipotle in (½ teaspoon), but once it was a part of the final product, I think it was the right amount. I really loved these and I have to thank Dana and her Food For Thought blog for such a great idea.

One thing to note is that the recipe here includes about twice as much pastry cream as you really need for the strawberries. You could cut down on the pastry cream, if you really want to. But it’s incredible, so rich and chocolatey and spicy, so personally, I recommend making the whole amount and eating it on its own like pudding. That’s what I did! Or if you are having a party, increase the number of berries and chocolate dip, and make a whole lot for everyone to enjoy. 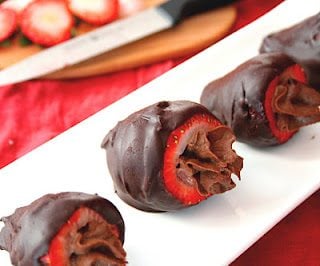 For the pastry cream, bring whipping cream to a simmer in a medium saucepan over medium heat. In a medium bowl, whisk egg yolks with sugar and salt, then whisk in cornstarch until mixture becomes pale yellow and thick, about 30 seconds.

Slowly whisk about half of the hot cream into the yolks to temper, then return the yolk/cream mixture back to the saucepan and cook until thick and glossy, about 1 ½ minutes, whisking continuously. It thickens up suddenly and quickly, so watch carefully!

Remove from heat and whisk in butter, vanilla and stevia. Add in chopped chocolate, cinnamon and chipotle and stir until smooth. Transfer to a small bowl and press plastic wrap flush to the surface. Chill in refrigerator at least 3 hours.

For the strawberries, wash and dry carefully. Cut off the tops along with the hull and discard. Using a small knife, gently core the center of the berries. You will only need to cut into the berry by about ¼ inch, as the center tends to be hollow. Place berries standing upright in a dish.

Place pastry cream into a piping bag fitted with a star-shaped tip. Fill each hollowed berry with pastry cream, allowing cream to overflow the top somewhat. Chill until chocolate dip is prepared.

Using a fork or two toothpicks, gently lower each filled strawberry into chocolate dip and roll around to cover. Remove strawberry and place on a plate lined with wax paper. Repeat with remaining berries. Chill 1 hour until chocolate is set.

Makes about 20 berries (with leftover pastry cream). Each strawberry has 3.5 g of carbs and 1g of fiber. Total NET CARBS is 2.5 g.