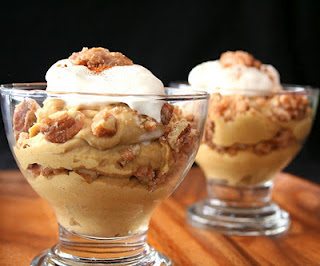 It is a wonderful thing, when you think your choices are extremely limited, to discover that you have a lot more options than you thought. Even better, that those options appear to be increasing all the time. This is how I felt when I first found that my gestational diabetes was here to stay, that I was a diabetic for life. I thought that for baking, my sweetener options were limited to artificial products like sucralose and aspartame, neither of which I have ever much liked. What a delight, then, to discover a whole world of alternative sweeteners that were naturally derived and had little to no effect on my blood glucose levels. Ever cautious, I first approached them with some trepidation. Could they be for real? How could there possibly be all of these sugar alternatives that I’d never even heard of? Could they really sweeten my foods without causing a blood sugar spike?

For someone with a true passion for baking, these alternative sweeteners have been an absolute godsend. Notice I use the term “alternative sweeteners” instead of “artificial sweeteners”. This is because sugar alcohols like erythritol and xylitol, and other plant-based sweeteners like stevia, are all naturally occurring substances. Sure, they have to be processed out of the plants in which they occur, but it also takes a lot of processing to get sugar out of sugar cane. And guess what? Even if you never knew it, you’ve been consuming erythritol and xylitol all the time, because they are both naturally occurring substances in many fruits and vegetables. This fact alone makes me feel a lot better about using them in my low carb baking. 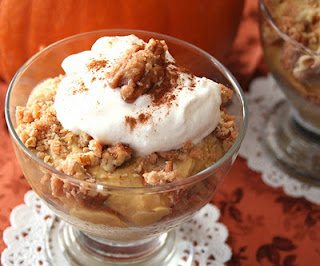 What’s especially heartening to me is that producers of these sugar alternatives are constantly striving to improve them. Recently on Twitter, I noticed a new follower going by the name of @swervesweetie. Intrigued, I clicked on their profile and discovered a new erythritol-based sweetener called Swerve. My new follower and I struck up a little correspondence, and they asked me to try out the product in my baking. So what’s different about this one? Well, they have formulated their product to be used cup-for-cup to replace sugar. Plain erythritol is only about 60-70% as sweet as sugar, but Swerve has been designed to be exactly as sweet as regular sugar. That’s pretty great news for anyone want to take a conventional recipe and make it sugar free.

For my part, I knew instantly what I wanted to make with it. I’d seen a recipe in the King Arthur Flour catalog that I wanted to make low carb, and I knew it would be a good match for the Swerve Sweetener. The King Arthur version, a Pumpkin Mousse with Salted Pecans, was anything but low carb, being made with their pastry cream mix. But I’ve had such success with pastry cream lately, I knew I could revamp the recipe to my specifications. And instead of salted pecans, I decided to use the Swerve Sweetener to its best advantage, and make some pecan pralines. 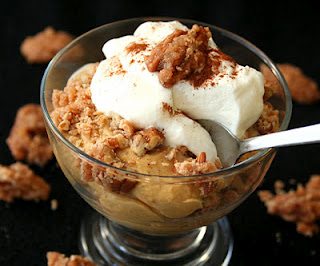 The Results: Okay, I officially declare this the perfect fall dessert. Really, it is amazing, like rich, thick pumpkin pie filling without the crust. And the pralines are to die for! Sweet and pecan-y, they add the perfect bit of crunch to the rich pumpkin pastry cream. If you haven’t decided what to serve for dessert on Thanksgiving Day, may I enthusiastically recommend this? I may be making a second batch for our Thanksgiving!

And how did the Swerve perform? Perfectly. I used it cup for cup in both the pastry cream and the pralines, and was very pleased with the sweetness of both parts of the dessert. And here’s an added bonus that the Swerve people didn’t even mention; there was none of the mouth-cooling sensation that is typical of other erythritol sweeteners. This is big to me, because I know a lot of people are put off by that when it comes to sugar alcohols. I think the Swerve folks need to make this a selling point, because it certainly is to me! 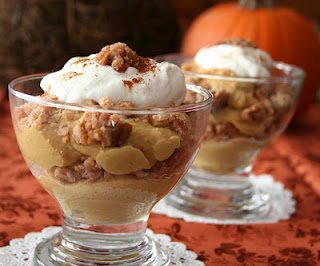 For the pastry cream, whisk together whipping cream, pumpkin puree, cinnamon, ginger and cloves in a medium saucepan. Bring to a simmer over medium heat. In a medium bowl, whisk egg yolks with Swerve sweetener and salt, then whisk in cornstarch until mixture becomes pale yellow and thick, about 30 seconds.

Slowly whisk about half of the hot cream into the yolks to temper, then return the yolk/cream mixture back to the saucepan and cook until thick and glossy, about 1 1/2 minutes, whisking continuously. It thickens up suddenly and quickly, so watch carefully!

Remove from heat and whisk in butter and vanilla. Transfer to a small bowl and press plastic wrap flush to the surface. Chill in refrigerator at least 3 hours.

For the pralines, combine Swerve with the cream, butter, molasses and salt in a small saucepan over medium heat. Stir constantly until Swerve dissolves and mixture boils. Continue to cook until mixture reaches 280F on a candy thermometer and just begins to darken. Remove from heat.

Stir in vanilla extract and let cool 5 minutes. Stir in pecans and mix vigorously, then pour into a parchment lined baking pan. Let cool and harden.

To assemble parfaits, take about a quarter of the pralines and place in a heavy-duty plastic ziploc bag. Crush with a heavy kitchen mallet until broken into small pieces. Set aside.

Garnish with lightly sweetened whipping cream, if desired, and 1 pecan half.