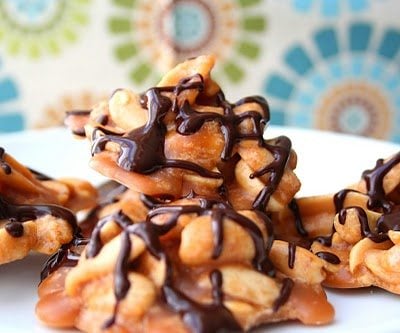 I’ve been meaning for a while to play around more with erythritol to see if I could get it to make a proper caramel sauce. I had seen a recipe on another blog for low carb magic cookie bars that included caramel sauce made with erythritol, and it certainly looked the part, but I was skeptical. I’ve done quite a bit of experimenting with this stuff, my favourite sugar substitute, and I’ve also done some research on it. Turns out that erythritol, unlike sugar, is non-hygroscopic, meaning that it does not attract moisture. This is why it doesn’t dissolve as easily as sugar and why it has a tendency to re-crystallize out of a water-based solution.

But I thought, or hoped against hope, that maybe this fellow low-carber had discovered some magical formula that would produce gooey, sticky erythritol caramel sauce. Being the frugal girl that I am, I didn’t want to waste the stuff if it didn’t work out, so I came up with a back-up plan. If it looked like my caramel was going to harden up, I’d throw in a bunch of nuts and turn it into a brittle. Or maybe cover it with chocolate and call it toffee. Either way, I was going to come up with something edible. And hopefully delicious. 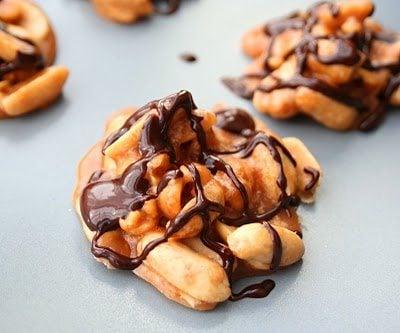 The Results: Well, I was right about erythritol caramel sauce. It was gooey and sticky when it was warm, but it began to harden immediately as it cooled. I could tell it was going to do so since it hardened quickly on the spoon I was stirring with. So I fell back on Plan B. As I was scrounging for nuts in my cupboard, I came upon a bag of salted peanuts and I knew it would be a good combination. I tossed them in and then scooped spoonfuls onto parchment paper and let them harden into clusters.

Oh my word, these are heavenly! I can’t even say I am disappointed by the lack of a true caramel sauce, since these were an amazing sweet/salty treat. I just barely managed to keep myself from devouring the whole lot in one go. It didn’t make that many so I didn’t share with my kids, but my husband helped himself to a few before I chased him off. I did drizzle some with chocolate, but I rather think they were better without it. These are a must-make low carb candy, no question. 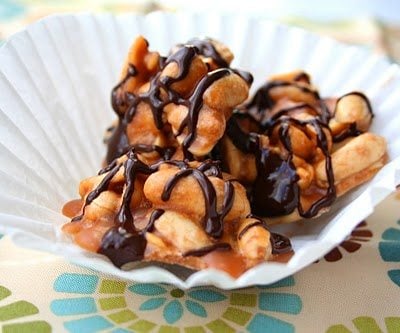 Line a baking sheet with parchment paper and set aside.

Combine the erythritol and agave nectar in a medium saucepan over medium heat. Stir frequently until all of the erythritol has dissolved. Continue cooking until mixture becomes a dark amber colour, 6-10 minutes. Do not overcook.

Remove from heat, and add cream and vanilla. Mixture will bubble vigorously. Stir until smooth.

Return to heat and boil 1 minute more. Stir in peanuts and let cool for 3 minutes.

Scoop tablespoons of peanuts onto prepared baking sheet. If there is any caramel sauce at the bottom of the pan, drizzle over clusters. Let cool completely on baking sheet (lest you burn your tongue, like I did!).

Drizzle with melted chocolate, if desired. I melted my chocolate gently in a ramekin in the microwave.

Makes 16 clusters. Each cluster has a total of 8.2g of carbs but only 2.2g if you subtract for erythritol.