I try to treat this blog like a real job. It started as a hobby, most certainly, but it has grown far beyond what I thought it would be. To get the most out of it, I find I have to approach it as I would a regular job, one that has a schedule and a routine. To that end, I try to post recipes three times a week, usually Monday, Wednesday and Friday, with the occasional extra post in between these times. But like any job and any routine, it can get thrown off by other areas of life. This week was definitely one of those times for me. Between some family issues (minor, but time-consuming), errands, and the approaching holidays, I have been feeling very overwhelmed. Knowing that something had to give, I decided to take a pass on my Friday post. I had a couple of recipes in mind, but no time to execute them, and it just didn’t seem right to rush it. When I finally found a few quiet moments to myself, I took the easiest of these recipe ideas and put it to the test. Fortunately, it passed with flying colours and I felt I could post about it. So, a rare Saturday post instead of a scheduled Friday one. Just a little extra time to help me keep my sanity!

I love mulled wine, but I haven’t made much of it at home. I think the first time I had it was as a teenager at home, when my mother made a batch at Christmastime. And just to be clear, I was in my late teens and the drinking age in Canada is lower, so she wasn’t doing anything illegal! But it was such a lovely drink, warm and comforting with the spices and sugar, and so perfect for the holiday season. Later on, in grad school, I decided to make some for a Christmas party I was hosting. And it was…awful. I used cheap wine, and I forgot to add the sugar, and no one really wanted to drink it. That was probably my last experience with mulled wine, but the memory of the lovely warm drink my mother made stayed with me. 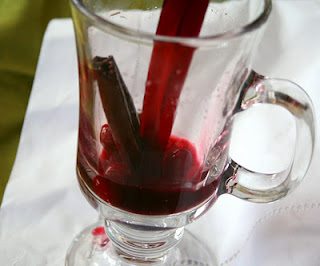 I’ve been hoarding cranberries like nobody’s business this fall. It irks me that this versatile berry is really only readily available in it’s fresh form at this time of year. Fortunately, they freeze well and I’ve got a number of bags in the freezer for the spring and summer. But whenever I see them in the freezer, my mind begins to whirl and recipes spring to mind. The idea of wine mulled with some fresh cranberries and fresh ginger was one of those recipes and I knew it was a good one. It was just one of those ones that had to be made. Of course, conventional mulled wine takes sugar and that just wasn’t an option for me. But there are so many sweetener options out there, it was simple to make up the difference.

For any one who’s interested in trying Swerve, the new erythritol sweetener I’ve mentioned a few times, they are having a fun contest on their Facebook page. Just post your New Year’s Resolution to win a pound bag of the granular or powdered Swerve sweetener. So far, I’ve only had great results with it, so I think it’s a contest worth entering. Check it out HERE. 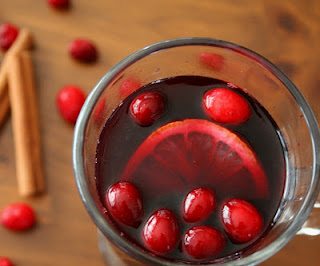 The Results: I already said that this recipe passed with flying colours. It certainly did. Unlike many mulled wine recipes, this has a tanginess to it from the cranberries and the lemon that offset the sweetness and the spices. Now, keep in mind that I like tart things, and so I kept the sweetener at a minimum compared to most mulled wines. But I truly enjoyed this, and it helped erase the memory of that awful grad school version. This is everything mulled wine should be…sweet, comforting, spicy, but with it’s own tangy, cranberry taste. 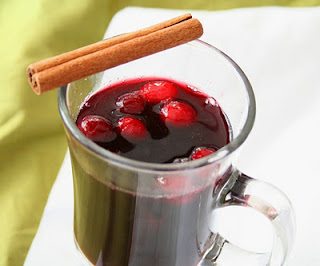 Combine all ingredients in a large saucepan and bring to a simmer. Simmer gently over low heat for 30 minutes.

Pour into mugs and garnish with cranberries and lemon.