Making your own Keto Cereal is almost as easy as pouring it from a box. It takes only 5 ingredients and 35 minutes of your time. Now that’s healthy convenience food!

I’ve been making this keto cereal for about a decade now and my family loves it. Long before any companies ever thought to mass market and make a profit from it! And this homemade recipe truly is about as easy as pouring it from a box.

I’ve got other tasty cereal options too, like low carb granola and keto oatmeal.

Why you need to try this recipe

So why make your own healthier cereal? I have a whole host of reasons for you.

It’s easy: Really, this keto cereal takes only 5 ingredients and 35 minutes of your time. So it’s about as much work as picking up a box at the grocery store or ordering it online.

It has clean ingredients: Pre-made keto cereals vary a great deal in quality. Some are much better for you than others, and some are pretty dodgy, at best. Making your own at home is the best way you can guarantee the nutritional factor.

It’s crazy good: This cinnamon crunch cereal is absolutely delicious. It has great cinnamon flavor and it’s super crispy too. And did I mention how easy it is to make?

One reader says: “I would never have thought of making this but for the fact that I’m on an egg-free salt-free elimination regime, but I’m glad I did because it’s absolutely delish and so easy to make. Very satisfying for a former cereal-aholic too. Even stays crispy in cream, unlike grain cereal.”

This post may contain Amazon or other affiliate links. As an Amazon Associate I earn from qualifying purchases.

This easy keto cereal recipe has been a reader favorite for a long time and with good reason. You only need 5 simple ingredients:

1. Pulse the dry ingredients: Combine the almond flour, coconut, sweetener and cinnamon in a food processor and pulse to combine.

2. Work in the butter: Scatter the butter pieces over the mixture and pulse until it resembles coarse crumbs.

3. Press out thinly: Spread the mixture on a baking sheet lined with parchment paper and cover with another sheet of parchment or waxed paper. Use a rolling pin and/or your hands to press down firmly so that the cereal sticks together and mixture is about ⅛-inch thick.

If you don’t have a food processor, you can mix everything by hand. Use a pastry cutter, if you own one, to work the butter into the dry ingredients. If not, use two knives to cut it up finely.

Press the mixture out as thinly and evenly as you can so that it bakes evenly. If the edges are getting too brown before the center is baked through, remove them. They will cool and crisp up while the rest is still baking.

Serve this cereal in a bowl with some almond milk or cream. You can also sprinkle bits over yogurt or your favorite keto ice cream. Some of my readers use this recipe to make a delicious crust for keto cheesecake.

How many carbs are in low carb cereal?

Many storebought keto and low carb cereals actually contain quite a few carbohydrates. However, this homemade cinnamon cereal has 6.5 grams of carbs and 3.4 grams of fiber.

Can I have cereal on keto?

Most cereals you find in the grocery store are made with wheat flours and full of refined sugar. You should not eat these if you are following a low carb or keto diet. My recipe for keto cinnamon cereal has 3 grams net carbs in a ½-cup serving, making it a great keto breakfast choice.

How do you store keto cereal?

Store the cereal in an airtight container on the counter for up to a week. There is nothing in this recipe that will spoil. But if you live in a humid environment, it may soften up a bit. You can always return it to a warm oven to re-crisp it.

Dairy-Free Option: Use melted coconut oil or any preferred oil in place of the butter. You don’t have to do this in a food processor, you can just mix everything in a bowl. Coconut oil tends to be greasier so try adding 5 tablespoons at first, and then add more if the mixture isn’t sticking together.

Nut-Free Option: Use sunflower seed flour in place of the almond flour. You will need two or three tablespoons more of it, and it may take a little longer to bake. Because this recipe contains no baking powder, you don’t need to worry about any green reaction. 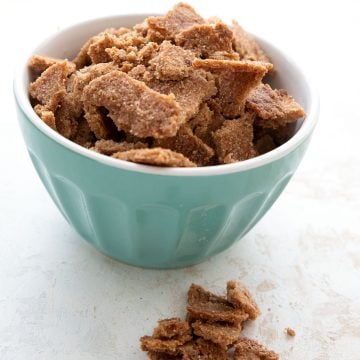 Storage Information: Store the cereal in an airtight container on the counter for up to a week. There is nothing in this recipe that will spoil. But if you live in a humid environment, it may soften up a bit. You can always return it to a warm oven to re-crisp it.    Cook’s Note: If the edges are getting too brown before the center is baked through, cut them off and remove them to a plate. They will cool and crisp up while the rest is still baking.
Nutrition Facts
Easy Keto Cereal Recipe
Amount Per Serving (1 serving = about ½ cup)
Calories 257 Calories from Fat 221
% Daily Value*
Fat 24.5g38%
Carbohydrates 6.5g2%
Fiber 3.4g14%
Protein 4.6g9%
* Percent Daily Values are based on a 2000 calorie diet.
42.0K shares
free email series