Keto churro waffles – tasty breakfast or low carb dessert? No matter what, these crispy keto cinnamon waffles are sure to please!

Happy January! Why not make your keto breakfasts interesting and fun with these churro waffles? Light and airy, and dredged in sweet cinnamon. And then dipped in a rich sugar-free chocolate sauce. Can’t beat that!

Honestly, these waffles could just as easily play the role of a sweet snack or keto dessert too. They are that tasty!

I have to be honest, I have never attempted any sort of churro recipe in my life, although I did enjoy the real deal once upon a time pre-keto.

But my youngest child has been at me to make some sort of keto churros for a while now. Knowing that real churros are tricky and time consuming as it is, I was casting around for a churro-esque idea that would be easier to make with keto ingredients.

And then this tasty looking waffle recipe from A Bajillion Recipes caught my eye. I realized that making keto churro waffles would be a lot more straightforward and have a much better chance of success.

How to make Keto Churro Waffles

Crispy keto waffles dredged in cinnamon and sweetener – how can you go wrong? Here are my best tips for perfect churro waffles:

Beat the egg whites: This is actually a trick I learned for lighter, fluffier waffles long before I went low carb. It’s an extra step but it’s definitely worth the effort.

Use a classic waffle iron rather than a Belgian style: I have both kinds of waffle irons and have found the shallower classic style to be best for keto waffles of all kinds. The big deep ones just use too much batter, making it hard to cook the waffles through properly. The mini Dash waffle makers would work well too.

Place cooked waffles in a warm oven: This is a trick I used with my keto pizzelle cookies too. Keto ingredients don’t come off the waffle maker nice and crisp, and may get overly browned if you leave them on too long. Placing them in a warm (200F) oven for 15 to 20 minutes gets them nice and crisp!

Let them cool out of the oven: The waffles won’t seem completely crisp until they cool to room temperature.

Dredge in cinnamon and granulated sweetener: For the real churro experience!

Dip in rich sugar-free chocolate sauce: This is a slightly thicker version of my Keto Hot Fudge Sauce. When you first whisk in the chocolate, it will seem quite thin, but will continue to thicken up as it cools.

Can you make Keto Churro Waffles ahead?

These churro waffles are a great make ahead recipe. You can just make the waffles ahead and store them on the counter in an airtight container for 4 days. You can freeze or refrigerate for longer but they will lose their crispness and will need to be returned to a warm oven.

The chocolate sauce thickens up a lot when cooled or refrigerated. Don’t just rewarm as it is, it will seize. Warm it very gently in a saucepan over low heat, whisking in a bit of cream or almond milk until it’s liquid again. 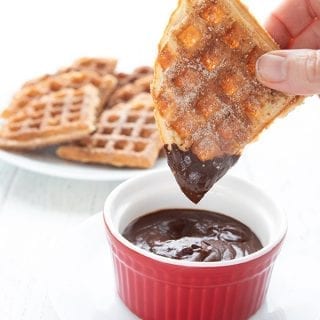