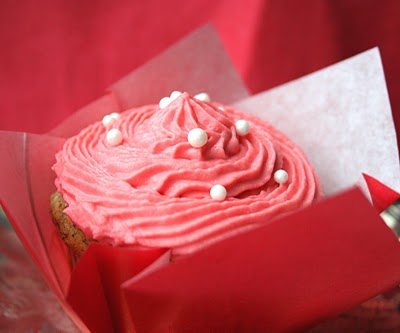 Sometimes a girl just needs a cupcake. I am probably stating the obvious here, but it’s true. I am not even that big a fan of cupcakes and I still need them once in a while. The whole cupcake craze of the past few years has done a number on our collective psyche, I think. Whereas before, cupcakes were just something you made for a baby shower or your child’s class party, now they are a statement. They can be dressed up or dressed down, they can be filled or unfilled, and they can go just about anywhere. People say cupcakes are out and 2011 will be the year of something else. But I rather suspect that although they might not be quite so in your face anymore, cupcakes aren’t going anywhere. Cupcakes are here to stay.

Sometimes, a cupcake/frosting flavour combination will just present itself in my mind. In this particular instance, I could just see how well the almond flavour would complement the raspberry. I intended to post them around Valentine’s Day because of the lurid pink of the icing, but I didn’t quite get around to it. And I think the flavours here don’t need to be relegated to a single holiday, they are timeless and would be just as good in the middle of July.

I knew I wanted an almond flour cupcake, with the flavour amped up by the addition of a little almond extract. For the icing, I wanted to add real raspberry puree, but I knew that it would need a little help for the flavour to come through. I didn’t want to buy any raspberry extract since I didn’t see too much use for it beyond this recipe, so I went to my liquor cabinet and pulled out a small bottle of Chambord that Santa (aka me) put in my husband’s stocking. A few teaspoons of that ought to enhance the raspberry flavour nicely! 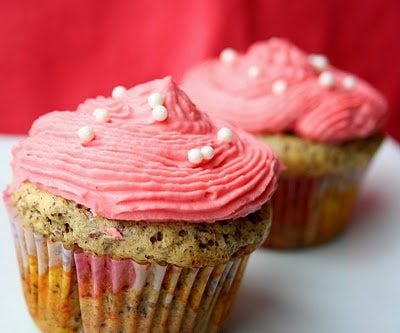 The Results: The frosting was the star of the show here. To me, it tasted just like raspberry ice cream and it’s a good thing that there was only just enough to ice the cakes, or I would have been spooning it out of the bowl straight into my mouth. The actual cakes had wonderful almond flavour, but the texture was more muffin-like than cupcake-like. This in itself is not a bad thing, I love muffins, but not when what I am craving is cake. They need a little tweaking to be less muffin and more cake, a feat that is not easy to achieve with almond meal. But I am working on it, I promise!

This frosting would pair really nicely with my Coconut Flour chocolate cupcakes as well. 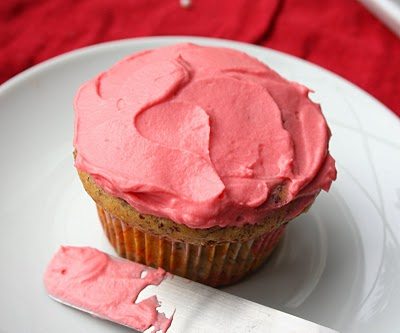 For the cakes, preheat the oven to 325F and line 6 regular-sized muffin tins with cupcake liners.

Place butter in a large bowl and beat in eggs one at a time. Beat in half of flour mixture until just combined. Beat in almond milk, and then beat in the rest of the flour mixture.

Divide batter among prepared muffin tins. Bake for 22-25 minutes or until cakes are set and a tester inserted in the middle comes out clean. Cool in pans.

For the frosting, set thawed berries in a fine-mesh sieve over a small bowl and smash with the back of a fork, pressing firmly to release as much liquid as possible. Set aside.

Spread or pipe icing on to cupcakes.