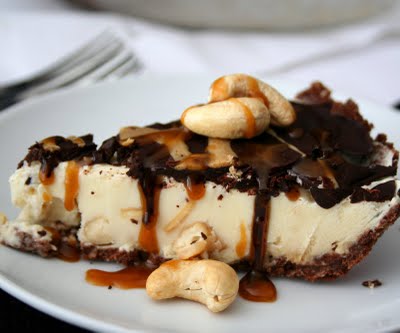 Being the bad foodblogger that I am, I did not plan ahead with a Father’s Day post to help guide my readers in their food choices for their celebrations. The truth is, we had such a busy weekend that I hardly knew myself what I was going to cook and make. We don’t do much to celebrate these Hallmark holidays in our house, though the kids like to bring home from school the sort of handmade gifts that warm a parent’s heart far more than anything storebought. Other than that, we just try to spend the day together, relax, and enjoy each other’s company, not always an easy feat when you have three young ones. Our “celebration” consisted mostly of making Daddy’s tea before he woke up and bringing it to him in bed, and then packing a light lunch and heading to the beach. It was a beautiful day. 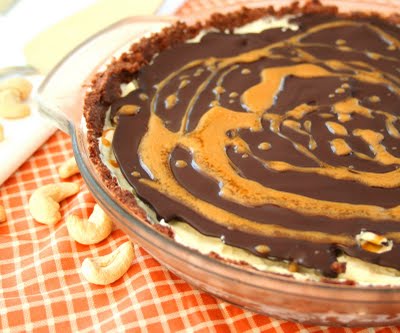 I did originally have a small plan for my husband, but it didn’t consist of me making anything for him myself. In fact, the plan was to buy him an ice cream cake. See, most of the time when we go to the beach, we stop at one particular creamery on the way home that sells some of the most incredible ice cream I’ve ever had. If you are ever spending the day on the North Shore in Massuchesetts, we have some amazing beaches that are worth a visit – Plum Island, Crane’s and Wingaersheek, to name a few. And if you do, it’s definitely worth your while to make a stop at Cherry Farm Creamery in Danvers. Their ice cream is phenomenal and their sizes are huge…don’t be fooled into getting anything larger than their “baby” size, because trust me, it’s ginormous! Back in the day when I could eat ice cream with abandon, I had to share the “baby” size with my husband or one of my kids, or risk feeling ill afterwards. They are that big. 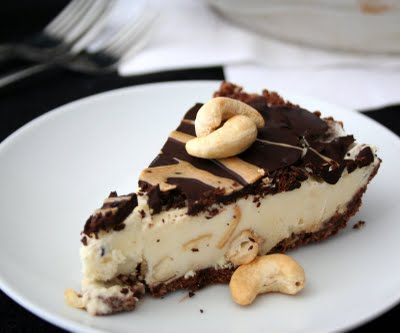 Our favourite flavour is their Cashew Turtle, full of toasted cashews with ribbons of caramel and chocolate. It’s insanely good. So my original plan was to order a Cashew Turtle ice cream cake, and go pick it up whether or not we went to the beach. Obviously it would be torture for me to have such a treat around the house and not be able to partake, but it was something I was willing to suffer to let my husband know just what a great dad he is. Alas, I looked up their website earlier in the week and discovered that they need 7 days for a custom-order cake. I was about 3 days too late! So I let that idea go and cast around for some other ideas, but I consistently came up short.

There I was, awake by myself early on Father’s Day morning, and no idea what to do. I contemplated whipping up a big pancake or waffle breakfast, but I was just so irked by the ice cream cake plan, I couldn’t let it go. Finally, my son came downstairs and I told him how stumped I was, when it almost occured to us both at the same moment. Why not make him an ice cream cake (or pie, in this case)??? At first, I thought about making the real deal, full sugar, full carb, over the top indulgence. But my husband has been such a willing guinea pig for my low carb experiments and he tends to like them quite as well as the real deal. So why not make a version in which I too could partake? Before anyone else in the house was awake, my son and I got to work making the vanilla custard for the ice cream, as well as a cup of tea for Daddy. When we got home from the beach, I made the crust and churned the ice cream, and put the whole thing together. 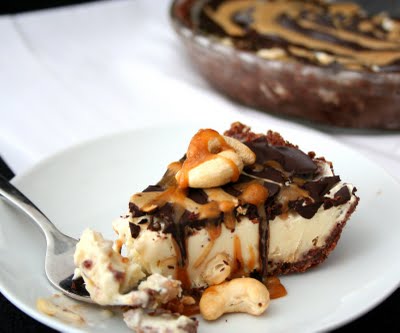 The Results: I think you can see from the pictures that it turned out quite well. The flavour was wonderful, and in that respect I was very pleased. The execution, however, left a little something to be desired. This was my first time ever making an ice cream cake/pie and I learned a few things along the way that I think I would do differently next time. But there will indeed be a next time, because it was delicious, and you can learn from my mistakes.

First off, once it’s all assembled, it takes quite a bit longer for the ice cream to firm up than I realized, so plan ahead and give it at least 2 to 3 hours to chill before serving. Secondly, caramel sauce made from erythritol hardens as it cools. I knew this, and was a little flummoxed as to how to add it in while still warm without melting my ice cream entirely. I tried adding just a bit at a time, but I could tell almost right away that it was too hot and my ice cream was rapidly melting. So I stopped then and there and decided just to reheat the sauce before serving and pour it over the top before serving. Finally, I found that even while spreading my recently-churned ice cream into the cooled crust, it was melting quickly. I would have done better to freeze my crust for half an hour or so before attempting to assemble the cake, to help keep the ice cream cold. 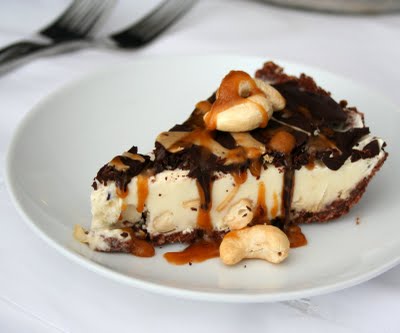 I was also not entirely satisfied with the chocolate topping. It tasted great, but it hardened too much and cracked when I was trying to cut nice, pretty pieces. I made it with coconut oil, thinking that would keep it softer than butter, but it didn’t. I am not quite sure how to address this, but I know it can be done. I just need to play around with it a bit, and I intend to keep working at it! Until then, it’s pretty darn tasty as it is, so make it as is, and enjoy!

*Note – I did not label this recipe as Gluten Free because I used Lindt chocolate for the topping. Lindt is not labeled gluten free, so may contain traces of gluten. However, you can substitute GF high % cacao chocolate to make a GF version. 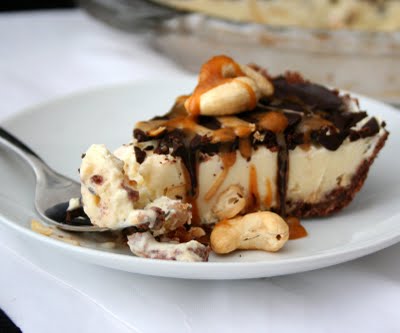 For the ice cream, set a medium bowl in a large container of ice water. Combine cream, almond milk and erythritol in a medium saucepan over medium heat. Stir occasionally and heat until mixture is steaming but not simmering, or 175F on a candy thermometer.

Whisk egg yolks in a small bowl until smooth. Very slowly whisk in 3/4 cup of the hot cream mixture to temper the yolks. Then slowly whisk tempered yolks back into cream mixture, stirring constantly. Continue to cook until very hot, 180F.

Pour custard into bowl set in ice bath, and let cool 10 minutes. Remove and cover tightly with plastic wrap. Refrigerate until chilled, at least 3 hours. Stir in stevia and vanilla extract, then pour into an ice cream maker and churn according to manufacturer’s directions, adding chopped cashews in the last minute of churning.

Prepare the crust while the custard is chilling in the refrigerator. Preheat the oven to 350F. Combine crust ingredients together in a 9-inch pie pan and mix until fully incorporated. Press crust evenly into bottom and up sides of the pan (using a flat-bottomed object like a glass or measuring cup to press it down firmly and evenly will help).

Bake crust for 10 minutes. Let cool completely and then freeze for at least half an hour before adding the ice cream.

Spread freshly-churned ice cream into prepared crust. Press plastic wrap directly onto surface of ice cream and remove any air bubbles. Chill until firm but not rock hard, about 2 hours.

While topping is setting, make the caramel sauce by combining erythritol, molasses and water together in a small saucepan over medium heat. Bring to a boil and stir until erythritol dissolves completely. Boil until begins to darken, about 3 minutes. Remove from heat and stir in whipping cream and butter. Return to a boil and cook until thickened, about 1 to 3 more minutes. Let cool 5 to 10 minutes until thick but still pourable. Pour over slices of ice cream pie and serve.

Yeah, so it’s not the lowest carb thing I’ve ever made…it’s what I like to call a “controlled indulgence”!