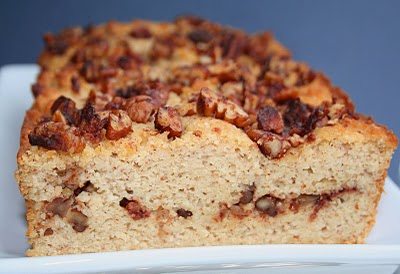 We finally, FINALLY, got some rain here in New England. It was a day late and a dollar short for my poor frizzled lawn, but the other parts of my garden loved it. And for us humans, the cool drizzly weather was a pleasant change from the intense humid heat we’ve been having. It rained almost constantly for four days, however, and by the last day, I was looking forward to seeing the sun again. That last day had the aspect of cozy dreariness, the sort of day where you want to sit home all day, doing much of nothing, reading books, watching movies and eating comfort food.

Those sorts of days are when I get the overwhelming urge to bake. It’s so strong, it’s almost like a physical need. I NEED to bake, it hardly matters what, I just need to be in the kitchen, whisking, mixing and stirring. This time, I didn’t want to make dessert, I wanted something dense and comforting, the sort of baked good I might buy at Starbucks to go with a mid-morning coffee. All those lovely tea breads that are arrayed in rows, tempting me, mocking me with their carb-filled deliciousness. I’ve had so much success with low carb muffins, surely quick breads lend themselves well to low carb makeovers as well?

There are any number of low carb quick bread recipes out there, but I had something very particular in mind. I wanted the bread to be warm and cinnamon-y, with a crunchy streusel topping. Better yet, streusel in the middle and on top! It generally takes sugar to make streusel so I wasn’t sure how it would work with my various sugar substitutes. But I’d never know unless I tried, right??? 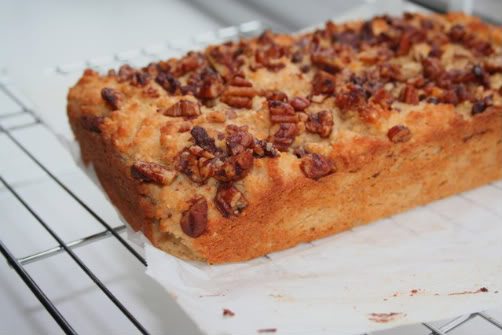 The Results: Hoo boy, am I glad I tried. Turns out that granulated erythritol makes for an excellent streusel topping. Mixed with butter, cinnamon and pecans in a hot pan, it melts and then hardens as it cools. It’s not exactly carmelized but it’s close, and it turned out better than I could have hoped. I could hardly keep from eating all of the cinnamon/pecan mixture, and I was worried there wouldn’t be any left for the actual bread!

As is often the case with gluten free ingredients, the bread didn’t rise as much as a conventional quick bread would. It was dense, but it was moist and flavourful and it definitely hit the spot. I might put a tad more cinnamon into the batter mix next time, but I was very pleased with how this turned out.

For the streusel, melt butter in skillet over medium heat. Add pecans and toss to coat. Add erythtritol and cinnamon and mix well. Set aside.

For the bread, preheat oven to 350F. Grease a 9×5 inch loaf pan, line with parchment paper along bottom and long sides of pan and grease parchment paper.

Bake for 40-50 minutes or until bread is golden brown on top and set. Cool in pan 10 minutes, then lift out by ends of parchment paper and cool completely on wire rack. The bread will be friable until completely cooled, so resist cutting into it early.

Store bread in foil in refrigerator.