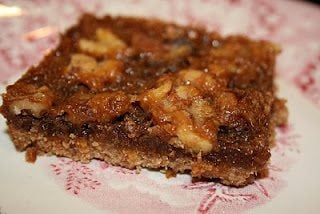 I find there are times when I get completely obsessed with a certain flavour combination. Somehow, it gets in my head and I start craving it all the time, and dreaming up ever more wild ways to combine the two (or more) flavours about which I am obsessing. Chocolate and peanut butter cycle through fairly often (especially when pregnant), and I’ve been known to melt PB with chocolate chips in the microwave in an effort to satisfy the craving. And an obsession with chocolate and mint last summer led to the invention of chocolate cupcakes filled with mint cream and glazed with chocolate mint ganache.

The current flavour obsession is, surprisingly, chocolate-free. I believe it can be traced back to the purchase of a three pound bag of walnuts at BJ’s. I’ve been eating a lot of walnuts lately, adding them to my yogurt or my oatmeal in the mornings, and sometimes just straight up as a high-energy snack, so the purchase of a huge bag from a wholesaler seemed like the economical thing to do. Perhaps it’s because it’s such a large bag, or perhaps just because I am wacky like that, but I’ve had walnuts on the brain ever since. And more specifically, I’ve been obsessing about walnuts and maple together. Maple walnut ice cream. Pancakes with walnuts and maple syrup. Maple walnut scones. So many tasty possibilities!

I didn’t actually make any of the aforementioned goodies. Instead, I wanted something in bar form, with a shortbread-like base and a slightly gooey filling, similar to pecan pie but without being overly sugary. I couldn’t find a recipe that suited so I started inventing. I also wanted to try using whole wheat flour for the crust, and I felt that the maple walnut flavour could stand up to the denser flour.

Now, some purists may be shocked that I didn’t actually use maple syrup for the filling, but instead went with corn syrup and maple extract. My reasons are two-fold. Firstly, have you seen the price of maple syrup lately??? I love the stuff and there was once a time when I couldn’t imagine using any imitation syrup, but when the price went up to $14 a bottle, I simply couldn’t justify it anymore. (As an aside, Trader Joe’s carries a maple/agave syrup blend that is a much better alternative than the old Aunt Jemimah!). Secondly, maple syrup is a lot thinner than corn syrup and the filling would require a lot more sugar to make it thicken properly, which is exactly what I didn’t want. So I decided to thumb my nose at the purists and go with the thicker corn syrup with maple flavouring, to save money and sugar!

The Results These turned out beautifully. They are rich-tasting without being overly sweet and the whole family approved. For my newly health-conscious self, the amount of filling was just right, but I do admit it was a bit on the sparse side. For a more pecan pie-like square, I’d suggest doubling the filling and baking them a little while longer to get the filling to set.

For the crust, preheat the oven to 350F and grease an 8×8 inch pan with vegetable oil spray.

Sprinkle mixture into prepared pan and press well into an even layer. Bake until the crust begins to brown around the edges, about 20 minutes.

Meanwhile, whisk all of the filling ingredients except the walnuts together in a medium bowl until the sugar dissolves.

Sprinkle the crust with the walnuts and then pour the filling mixture evenly over the crust. Bake until the top bubbles up thickly and is set, about 20-25 minutes, rotating the pan halfway through.

Let the bars cool in the pan for about two hours, then cut into 16 squares.

Note: for a thicker filling, double all filling ingredients except the walnuts and bake longer to set.