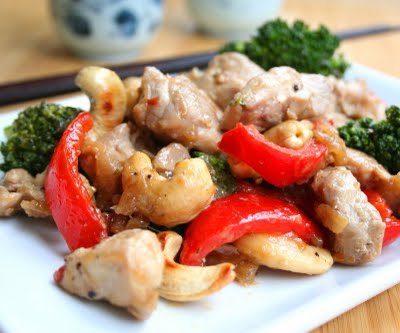 If you are like me, you ate a fair bit of stir-fry in the first few years living on your own. Like pasta, stir-fry was a staple for me in university – it was quick, cheap and it made a lot of leftovers, so I could stretch it out for several meals. Unlike pasta, however, my stir-fries weren’t any good. I had no idea what I was doing or how to flavour them, and they were little more than a collection of soggy vegetables and stringy meat with a little bit of soy sauce. It seemed like it should be so easy to make, but good stir-fry eluded me and I stopped even trying. I eventually became a (much) better cook, but I avoided stir-fry, convinced that there was some secret trick or ingredient that I was missing. 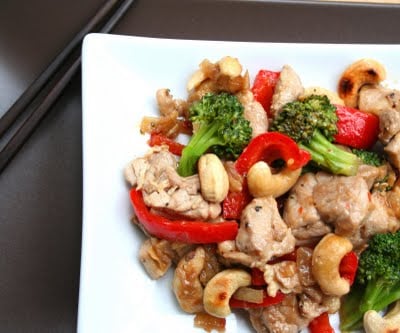 It was only a few years ago that I tackled stir-fry again, with the help of one of my favourite cookbooks, “How to Cook Everything” by Mark Bittman. Such an ambitious title for a cookbook, but really, the man does know how to cook a lot of things! Turns out that I wasn’t really missing any sort of trick or ingredient, except perhaps the inclusion of some cornstarch to make the sauce stick to the other ingredients. Other than that, I suppose it’s more a matter of knowing how to not overcook my vegetables and meat. Stir-fry is now everything I hoped it would be back in college…quick, easy, relatively inexpensive and, most importantly, delicious. 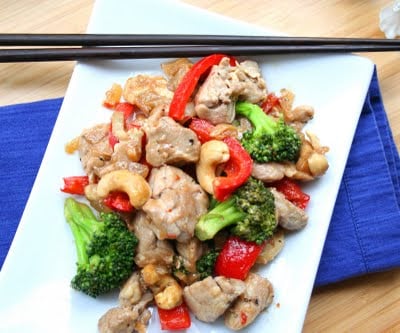 I don’t even really follow the recipe at all anymore, as I make endless variations on the basic theme. I use whatever vegetables I have on hand, sometimes I include tofu or chicken, sometimes I don’t. I’ve come to realize that I like a bit of a kick to my sauce, so I now include red pepper flakes. I don’t always have fresh ginger root around, so often it’s 1/2 a teaspoon of ground ginger in the sauce, which works pretty well. This go round, I decided to throw in some cashews for flavour and crunch, and I was really pleased with the result. They add to the overall carb count, but as I don’t eat my stir-fry with any rice anymore, it was worth it. I also did have fresh ginger, and the combination of ginger, red pepper flakes and cashews really made for an amazing meal. It’s a far cry from the bland, tasteless stir-fries of my university days! 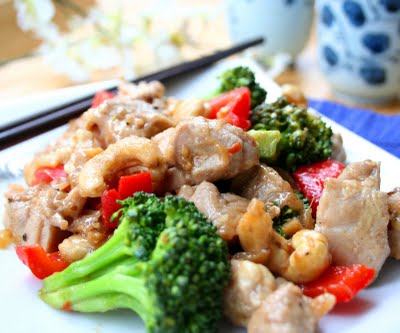 A few quick notes. I highly recommend steaming the broccoli lightly before adding it to the pan. It should be bright green but still quite crisp. I do mine in the microwave for two minutes. Broccoli just doesn’t cook well in a stir-fry without a bit of a head start to break down the tough fibers. I also recommend toasting the cashews lightly. They aren’t in the pan for very long, and a bit of toasting beforehand really helps bring out their flavour. I also prefer chicken thigh meat over breasts, because it has better flavour and is much less likely to get dried out from over-cooking. 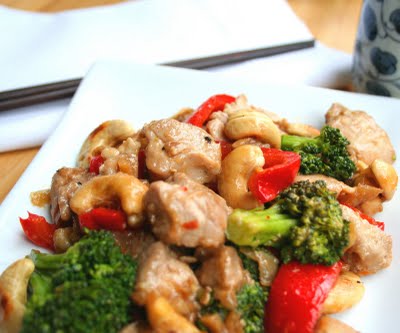 In a small bowl, whisk together soy sauce, water, cornstarch and red pepper flakes. Set aside.

Heat half the oil in a wok or large skillet over medium-high heat, until shimmering but not smoking. Add chicken and cook, stirring frequently, until no longer pink, 3 to 5 minutes. Remove to a bowl.

Add remaining oil, and when hot, add onion and ginger. Cook, stirring frequently, for 2 minutes. Add red pepper and broccoli and continue to cook and stir until vegetables are tender, 3 to 5 minutes. Add cashews and cook 1 minute more, then add chicken back to pan and toss to combine.

Give soy sauce mixture a quick stir and add to the pan. Cook, stirring to coat meat and vegetables, until sauce is thickened, about 1 minute. Serve immediately.