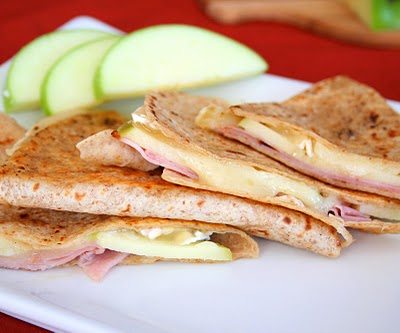 Picture this: a heavily pregnant woman walks into a William Sonoma in downtown Boston, where she proceeds to buy a panini press. She then hauls this surprisingly heavy kitchen item all the way home on the Orange Line, from Back Bay to Forest Hills station, where she waits for the bus. Normally, she would walk the 15 minutes home, but given that she is 7 months pregnant, with some back issues and a heavy panini-maker, she decides to treat herself to a bus ride. When she gets home, her husband is sitting in the living room, watching TV. Their anniversary is just days away, but the woman can’t wait. She has to show him his present now, she is just too excited about it. He is as thrilled as she knew he would be, and they both start scheming as to what they will make first.

See, even back then, I dreamed about food all day! That was a while ago now, but it’s a true story. I literally couldn’t contain my excitement over a new piece of kitchen equipment. If memory serves, I’d had a really bad day at work and I needed cheering up, so I didn’t want to wait the three or four days until our actual anniversary to give it to my husband. That panini press went on to become a vital kitchen item, seeing a great deal of use for several years. We even hauled it all the way up to Maine on a trip to see my sister-in-law, so that we could serve them panini one evening. We still have it and it still works, it simply doesn’t see as much action now that I am a diabetic. Poor beloved panini press. 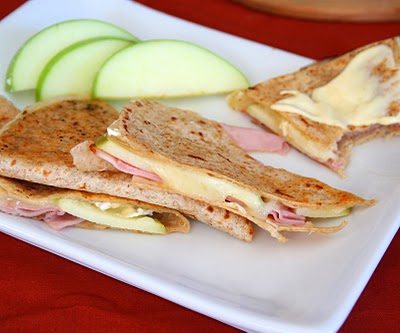 This recipe isn’t for panini, obviously, but it is inspired by panini. What got us so excited about panini, if I remember correctly, was an amazing sandwich we’d had at a winery in Rhode Island. It was one of those meals you dream about afterwards, the circumstances were just so perfect. It was a gorgeous fall day, warm and sunny, and this was our final stop on a little winery tour. We sat outside, talking with friends and eating these gorgeous sandwiches that were grilled to perfection. Once we had our own panini maker, we recreated that sandwich over and over for friends and family. Simple ingredients that combined perfectly.

I’ve missed that sandwich, it’s one of the things towards the top of my “to-eat” list if ever my diabetes magically disappears. But I am not holding my breath. So when I recently saw a quesadilla recipe that contained apple on Mr. and Mrs. P, a lightbulb went off. I might not be able to have the delicious crusty Italian bread, but there was no reason I couldn’t fill a low carb tortilla with my favourite fillings. Why the heck not??? 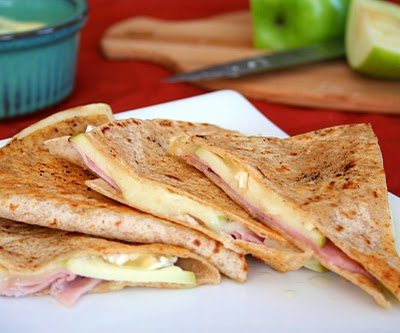 The Results: Many, many thanks to the fellow bloggers who inspired the idea. This was the best lunch I’ve had in a while. Sure, it might be a bit more substantial on crusty Italian bread, but the tortilla actually showcased the fillings wonderfully. The brie got all melty and gooey while the apple stayed crisp and sweet. Paired with some Dijon mustard sauce, it was just perfect, and I am glad I bought enough ham to make a second round. I plan on having it for lunch again today! I’m hungry just thinking about it right now.

Whether you are a low carber or not, I highly recommend this. Quesadillas don’t have to be all black beans and cheese, after all. They lend themselves to lots of wonderful flavour combinations. And this makes such a simple, quick, but flavourful meal. Or serve it as an appetizer. I made only one serving, but of course you can double, triple, quadruple this to serve your needs. 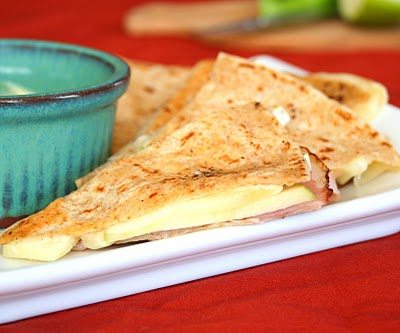 In a small bowl, stir together mustard and mayonnaise. Spread about 1-2 tsp thinly over tortilla. Top one half of tortilla with cheese, ham and apple and fold the other half over top.

Remove quesadilla to a cutting board and let cool for a few minutes to allow for easier cutting. Cut into four equal pieces and serve with remaining dijon mustard sauce.