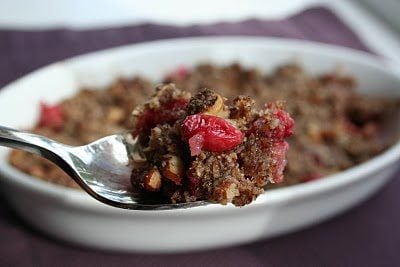 I won a 5k race last night. Wait. Let me rephrase that. I won a 5k race for my gender and age group last night. And in the spirit of full disclosure, there were only 80 people participating. But I am still extremely proud of myself. I was the second woman to cross the finish line, and I came 15th overall, beating many of the young men and women who had entered and who I figured would kick my 37 year old butt. For someone who only started running last February, racing at a 7:46 pace for over three miles is quite an accomplishment. If you had told me a few years ago that I’d be a die-hard runner who might have a shot at winning a race, I would have laughed in your face.

Knowing that I was heading out for the race in the evening, I figured I’d want a little treat to come home to afterwards. We went apple-picking last weekend and I had promised my children I would make them apple crisp. And so I did, in all it’s sugary, floury goodness. For myself, I threw together another crisp, one that looks, tastes and smells the part of a true apple crisp but doesn’t have any flour or sugar.

I’ve made a low carb crisp before, when I wanted a rhubarb dessert back in June. It was good, but I wanted to see if I could improve on the topping and make it really live up to it’s name. The topping on my strawberry rhubarb crisp was tasty, but it didn’t crisp up nicely. It simply did not have the texture that I wanted. Since then, I have learned a thing or two about low carb ingredients and how they behave in baking. Having discovered how erythritol will harden when cooked with butter, I decided to use that as my main sweetener. And I eschewed the coconut flour for this topping, because of the way it absorbs moisture.

Since I love tart/sweet desserts, I tossed in some cranberries into the mix to punch up the flavour. This also allowed me not to skimp on the filling, since apples are highish in carbs and cranberries are not. I didn’t add any thickener to the filling, as apples have quite a bit of pectin themselves and generally don’t need it. 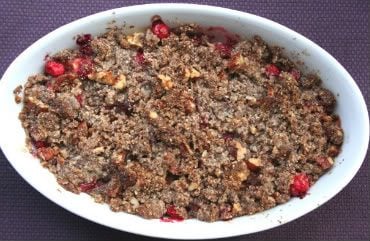 The Results Finally! A low carb fruit crisp that deserves the name Crisp! I am truly thrilled with these results. I didn’t think the topping was going to crisp up properly, as it seemed soft when I took it out of the oven. But after it started cooling, it began to harden. And it has stayed crisp, even while sitting on the counter overnight. The taste is just the right balance of tart and sweet that I wanted. Some might like the filling a little sweeter, and in that case, I would adding some erythritol or a little bit of stevia extract to the filling. But I like it just the way it is.

Something to consider when working with erythritol – it actually has as many carbs as sugar (4 per tsp). However, for a lot of people it seems to have little to no effect on blood sugar. I don’t profess to understand how this works, but I have tested many treats with it, and found that, time and again, it doesn’t seem to register in my glucose levels. This is why you will see me list the total carb count, and then the carbs with erythritol subtracted.

Since this crisp was just for me, I made it in a small ceramic oval dish. It is only about 4 servings worth, and the dish is 9×5 (but since it’s an oval, it is smaller than a rectangular 9×5 dish would be). If you don’t own such a dish, you could divvy it up between 4 ramekins. Or you could just double the recipe and make it in a larger dish.

Place apples and cranberries in small glass or ceramic baking dish or ramekins. If you are sweetening the filling with anything, you can mix it all up in a bowl first.

Sprinkle topping over apples and cranberries. Bake for 25-30 minutes, or until topping begins to brown. Let cool on a wire rack for at least half an hour. Serve with lightly sweetened whipped cream.