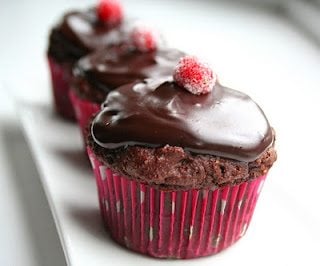 The problem with Thanksgiving leftovers is that there are never even amounts of each dish. The mashed potatoes might be all gone, but there is still plenty of stuffing and turkey. Or the turkey is all gone, but there are outrageous amounts of green beans still left. You just never end up with the right amounts of anything to keep eating them together as you do on the actual day. Besides which, we all get pretty tired of the same dinner over and over anyway. In my case, it seems that I always have cranberry sauce to spare. I love the stuff, but it’s not really a dish in its own right, it’s a condiment, and as such is eaten sparingly. So I always end up with a jar languishing in the refrigerator, long after all the turkey and sides are gone or have been used up in other dishes. And what else do you do with cranberry sauce besides put it on turkey?

Last year, I ended up putting some of my leftover cranberry sauce to good use, in these Cranberry Cinnamon Pinwheels. But they weren’t low carb or gluten free and this year I wanted to use up the sauce in a way that I could enjoy myself. I honestly cannot say from whence my inspiration came this time, but I just suddenly knew they’d make a great filling for chocolate cupcakes. And as I had been wanting to try adapting my basic almond flour cake recipe for a chocolate version, I knew this was the way to go. 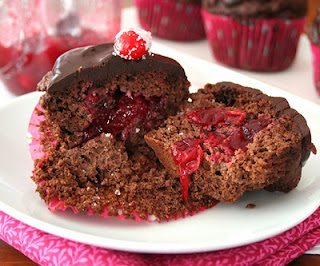 I’ve made a number of filled cupcakes in my day, most of which aren’t low carb. There are several different techniques for putting in the filling, but I think the best, and the least messy, is coring the cupcakes and spooning or piping in the filling. I happen to have the perfect tool for this as well, although I didn’t realize it at the time I purchased it. It was only happenstance that I discovered that the 1-inch diameter biscuit cutter which came in a set was ideal for coring cupcakes. I remember holding the thing up to my husband and laughing, asking why I would bake biscuits that were so small. But a few weeks later, I came across a Martha Stewart article on creating filled cupcakes, and she used the very same thing to create a nice even hole in each cupcake. I tried it myself and it worked like a charm, pushing into the cupcake and pulling out a perfect core without breaking the cakes at all. Then I could cut the top off the core and use it to cover the filling before frosting each cupcake.

If you don’t have such a tool, you can create a similar core using a small, sharp knife, but you will likely have to angle your knife to create a cone-shaped core so that you can get it out more easily. But if you do have a 1-inch diameter cookie or biscuit cutter, you will find this is a perfect use for it. I was a little concerned that it might not work as well with the somewhat denser consistency of a low carb cupcake, but my fears were groundless. My cores came out just as well as they do with regular cake. Then I filled the cakes with about a tablespoon of leftover cranberry sauce (in my case, I actually used the Chipotle Lime Cranberry Sauce because it’s what I had), popped the tops back on, and covered the cupcakes in chocolate ganache. I garnished each with a “sugared” cranberry (really, just a cranberry dipped in water and then rolled in granulated erythritol). 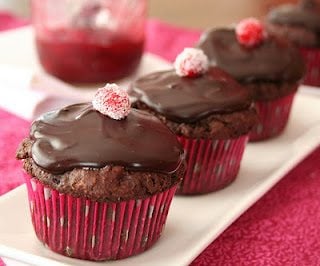 The Results: Cranberry and chocolate are a great combination. These are so fun and pretty, and a perfect way to use up cranberry sauce. And I have to say, although you can use any old cranberry sauce, the Chipotle Lime version adds a nice little kick to these chocolatey cakes! The cakes themselves were lovely and moist, and I left a few unfilled to give to the kids, as I knew they wouldn’t like the cranberry version. My rather precocious middle child knew it wasn’t a “regular” cupcake almost instantly, but she still devoured hers and asked for a second, so that’s saying a lot. My 2 year old was completely fooled, and called them “happy cake”, singing Happy Birthday to herself while she ate. 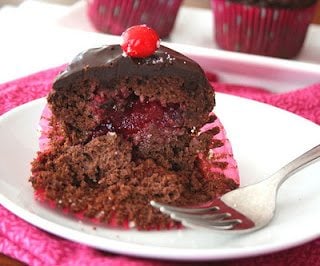 For the cake, preheat the oven to 325F and line a 12-muffin tin with paper liners.

In a medium bowl, whisk together the almond flour, cocoa powder, erythritol, protein powder, xanthan gum, baking powder, baking soda and salt, breaking up any clumps with the back of a fork. Set aside.

Spoon batter into prepared muffin tins. Bake cupcakes for 25 to 30 minutes. The tops should spring back when lightly touched and a tester inserted in the middle should come out clean. Cool in pan 5 minutes, then transfer to a wire rack to cool completely. 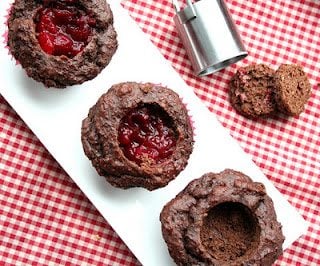 Core the cooled cupcakes using a 1-inch round biscuit or cookie cutter as in the picture above (if you lack both of these, you can do it with a sharp knife). Make sure to give the biscuit-cutter a little twist while it’s in the cake, to get the core out more easily. Set cores aside. Spoon about 1 tbsp of cranberry sauce into the hole. With a sharp knife, cut the very tops off the cores so that you have a thin disc of cake. Place a disc on top of the cranberry filling and press lightly to adhere.

For the chocolate topping, melt butter together with chopped chocolate and powdered erythritol in a small saucepan over low heat, stirring continuously until smooth. Add cocoa powder and stir until smooth. Stir in vanilla and stevia extract. Let cool 10 minutes, until thickened but still spreadable. Spread over each cupcake with a knife or offset spatula. Let set about 30 minutes, then top with a “sugared” cranberry.