Looking for a super easy sugar-free dessert that whips up in minutes? Look no further than these easy Keto Brownie Parfaits. They’re creamy, crunchy, and delicious!

You know I love to bake, and I put my heart and soul into creating mouthwatering recipes. But, just like you, there are times that I need easy keto desserts. When I am short on time, or tired, or it’s too hot to turn on the oven.

And that’s where these Easy Keto Brownie Parfaits come in. 5 simple ingredients, no baking required, and they come together in about 20 minutes flat.

Best of all? They are decadently awesome! Totally swoon worthy, over the top, delicious.

Now, this recipe does rely on some pre-packaged keto treats. While I generally advocate for making most of your low carb and sugar free treats at home, that rather defeats the purpose of no bake keto desserts.

In the past, I would eye conventional “no bake” recipes on Instagram and Pinterest with some frustration. Because if I was going to ketofy them, it meant I needed to do some baking. I had to make the keto cookies or keto brownies myself from scratch.

In the past 3 or 4 years, however, there has been an explosion of keto products. Which is both a blessing and a curse. It’s a blessing because it makes keto more convenient, but it’s a curse because there are some that are pretty junky. And it’s really hard to separate the truly good, truly keto products from the questionable ones.

As always, you need to read the labels with a critical eye. I look for products that basically use the same ingredients I would use at home. Here are a few I would recommend for this recipe:

What about homemade keto brownies?

You can easily use homemade brownies in this recipe as well. I recommend my Chewy Keto Brownies, and you would need about 1 cup of them, crumbled or finely chopped. It does mean some extra work but then you have the rest of the pan for later.

You could also use a boxed keto brownie mix. Once again, they aren’t all created equal so you need to do a bit of research. There are some good ones and some with questionable additives. A few I recommend:

How to make keto brownie parfaits

Once you have the brownies picked out, this recipe is ridiculously easy! You will need:

Place most of the brownie bites in a ziplock bag, holding back a few for the tops of the parfaits. Crush them with a rolling pin until they resemble coarse crumbs. If you are using soft homemade brownies or cookies, simply crumble them with your fingers.

Then simply layer the parfaits, starting with the brownie crumbs and then a scoop of the filling. Repeat. Top each with the reserved brownie bites (or a small pieces of homemade brownies).

Voila! An easy keto dessert that’s so decadent, no one will believe it’s sugar free.

How to serve keto brownie parfaits

Now that you know how to make these easy treats, you can have some fun jazzing them up. Try adding some fresh berries when they’re in season. Or drizzle with a little of my sugar free caramel sauce, or my sugar free chocolate syrup.

We drizzled a little caramel over ours and we were in heaven!

You could also use purchased keto syrups like those from ChocZero. Lots of delicious options there, too. 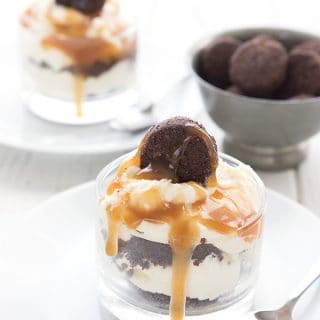