These creamy keto cheesecake bars with white chocolate and raspberries are a truly special sugar-free dessert. This post is sponsored by ChocZero.

Cheesecake lovers, have I ever got a special treat for you! These Keto White Chocolate Raspberry Cheesecake Bars are absolutely heavenly. One taste and I am sure you will agree.

After almost 11 years of blogging, I’ve racked up an astonishing number of keto cheesecake recipes. Clearly I have thing for sugar free cheesecake.

It’s no wonder that it’s the darling of the keto dessert world. It’s easy to adapt to this lifestyle and there are infinite flavor options.

There are also so many different ways to make it. A few fun ideas:

I love chocolate, all kinds of chocolate. Dark, milk, white… you name it, I will eat it.

For a long time, dark chocolate was the only varietal that was keto-friendly. While I love good, deep dark chocolate, I found myself wistful for the lighter stuff. Keto white chocolate seemed like a mythical creature.

And then ChocZero came along and fulfilled my dreams! Their sugar-free white chocolate chips have allowed me to create so many of the recipe ideas I was holding back on.

So when I spotted some white chocolate raspberry cheesecake bars on Garnish with Lemon, I was eager to try my hand at a keto version.

Make the sugar free raspberry sauce first, so it can cool properly before being swirled into your cheesecake bars. I made mine with frozen raspberries from my own garden but fresh would be fine too.

For simplicity’s sake, I left the seeds in my sauce. If you prefer, you can strain out the seeds through a sieve.

I love the contrast that a chocolate crust has with the white cheesecake. You do want to par-bake the crust so that it sets up better and is more firm after the cheesecake is baked.

To par-bake: press the crust firmly and evenly into the pan and bake at 325F for 12 minutes. Let cool while you prepare the cheesecake filling.

Melt the white chocolate gently in a double boiler set up. White chocolate is finicky stuff and can seize very easily so stay near it, stirring almost constantly.

This is a pretty basic cheesecake filling, with the addition of a little sour cream for texture and smoothness. If you prefer, you can use 2 tablespoons of heavy whipping cream instead.

Stir the melted white chocolate into the mixture before adding the egg. Once the egg is added, you want to beat until it’s just combined. Over-beating can cause puffing and cracking in a cheesecake.

As always, make sure ALL of your ingredients are room temperature!

Dollop about half of the white chocolate cheesecake batter over the cooled crust, then drizzle with about half of the raspberry sauce. Repeat this with the remaining batter and sauce. Then swirl until it’s all beautifully mixed up!

Don’t swirl too much, as you will simply end up with a pale pink cheesecake. Try to leave the contrast of white and dark raspberry pink showing through.

Cheesecake is best removed from the oven when the sides are set but there is still a jiggle in the center when you shake the pan. This results in the creamiest consistency.

Can you make keto cheesecake bars ahead?

For frozen cheesecake bars, thaw them at room temperature for 30 minutes or so, or in the fridge for several hours. 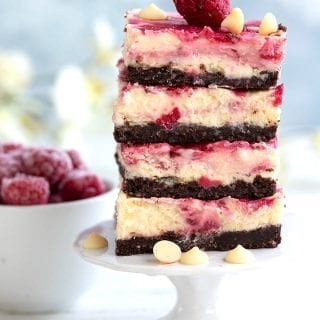