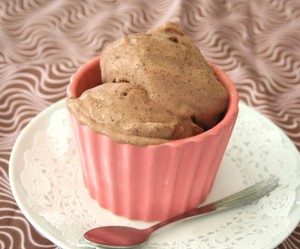 It’s truly a joy when your children start to show an interest in the things you love.  Even though it usually creates an astounding mess, I get such a kick out of the fact that my son now shows a strong interest in cooking.  Up until recently, his interest was limited to helping me make cookies, but it was far more about eating the sprinkles, chocolate chips and raw cookie dough than the actual process itself.  But lately, he wants to be involved in all parts of the process, and has even started getting lunch for himself and his younger sisters.   And I recently heard him describing to my husband a recipe idea for a “chocolate smoothie”, and he’d actually given it considerable thought.  Of course, the list of ingredients was enough to give this diabetic a heart attack right then and there.  But the more I thought about it, the more I realized I might be able to use this to my advantage.

A few weeks ago, a reader had requested on my Facebook page that I develop a few more egg-free ice cream recipes.  I generally lean toward egg custards for my ice creams, because egg yolks help keep the ice cream softer when frozen.  But I was definitely up for the challenge and I thought I could have a little fun with it and let my son create a lower-carb “chocolate smoothie” with the results.  My kids are somewhat fascinated by the blog and have a way of trying to insert themselves into it when they can.  Why not feature them and let them really be a part? 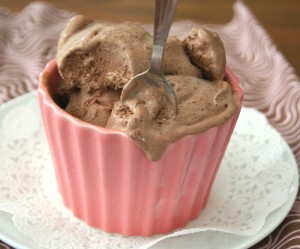 The ice cream recipe itself is pretty basic.  I decided to attempt a basic egg-free chocolate ice cream because I’ve noticed how cocoa powder and chocolate help thicken the ice-cream base.  A thick base before churning usually translates to a softer, creamier ice cream when it’s frozen, with less iciness.  In the absence of sugar to help keep the freezing point of the finished product low, a thicker base really makes a difference.  I plan to attempt other flavours but I am going to have to figure out how to thicken them more.

As for my son’s creation, we kicked around ideas of how to jazz up the smoothie (really, it amounts to a chocolate milkshake) and so I let them have fun with some add-ins.  They settled on a S’mores flavour, so we crushed up some gluten-free grahams, chopped up a few marshmallows, and swirled in some chocolate chips.  Not exactly low carb anymore, but waaaaaayyyyyy better for them than my son’s original idea.  And as for the ice cream itself, it’s so good.  Rich and thick, and although it freezes quite hard, as almost all homemade ice creams do, it softens quickly in the fridge and has a creamy texture. 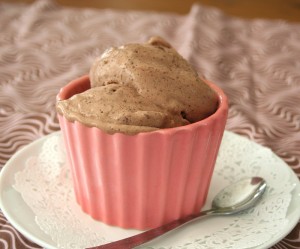 And now I am going to make you scroll through pictures of my adorable older kids (the littlest was at daycare) creating their smoothies and enjoying the fruits of their labours before you can get to the actual ice cream recipe.  They really want their picture on the blog! 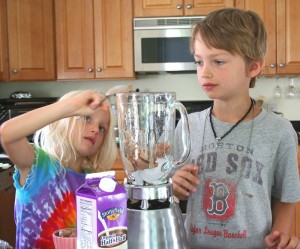 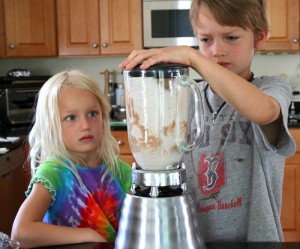 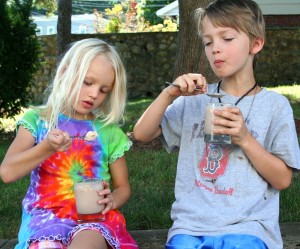 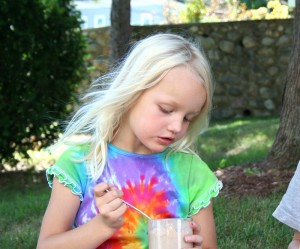 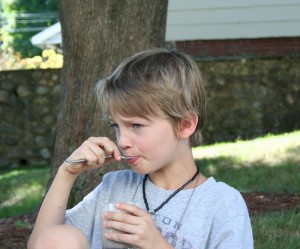 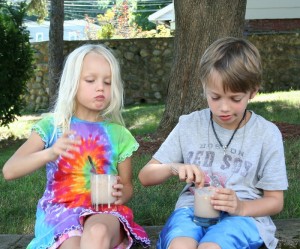 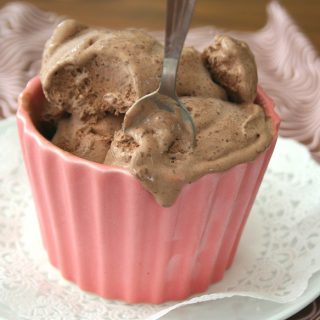