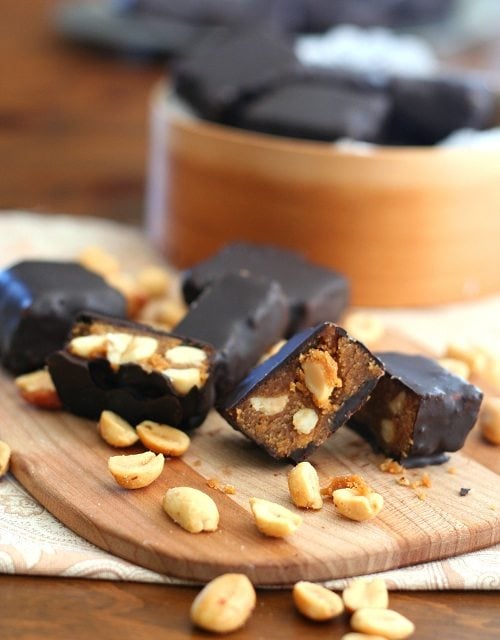 A mistake in the kitchen led to one of the most delicious low carb treats I’ve ever made.  A homemade candy bar packed with peanut butter, caramel and chopped peanuts.

When I was growing up, there was a huge cultural divide between the US and Canada in one very important regard…candy bars.  This divide was so big, so utterly divisive, that in Canada we didn’t even call them candy bars. Any sort of confectionary covered in even the thinnest chocolate coating were always called chocolate bars.  And although we had several brands in common with our American friends, we definitely had chocolate bar envy.   We got many American TV channels and it always seemed like the US had endless varieties of sweets we couldn’t get on our side of the border.  A vast array of nutty, nougat-y, caramel-y combinations with intriguing names like 100 Grand, Mr. Goodbar and PayDay.  We were like kids with our noses pressed against the glass of the candy store window. On the outside, looking in. 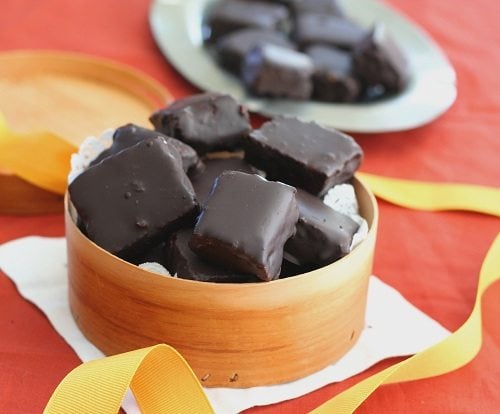 Now that I live on this side of the border, I know that US candy bars aren’t really any more interesting than all the lovely Cadbury’s varieties which are hard to find here in the US.  But there still remain quite a few American sweets I haven’t even tried.  Such as the Whatchamacallits.  Never even had a little taste, so you must wonder what I am doing creating my own homemade, low carb version.  The truth is that I did not set out to create such a thing at all.  And not having actually tasted a Whatchamacallit, I can’t really say that these bear all that much resemblance to the original.  But I honestly DON’T know what to call them, and since they include caramel, peanut butter, peanuts and chocolate, it seemed a rather fitting name.

See, I actually set out to create a homemade version of another candy bar altogether.  I had formed an idea of a low carb PayDay bar, with a peanut butter caramel center rolled in salted peanuts.  But I made a wrong turn somewhere along the way and ended up with a strange peanutt-y filling that globbed and seized and wouldn’t smooth out at all.  I attempted to save it with the addition of some peanut flour, thinking that might un-clump the mixture.  It did not.  So I finally poured it into a pan, smoothed it as best I could, and popped it into the fridge.  It tasted far too good to throw away, but I really wasn’t sure what to do with it.  And then I hopped on Facebook and sought comfort in my lovely followers, who kindly sympathized with my huge recipe fail.  One  sweet soul said “At least you fail once in a while, like us mere mortals”.  Ah, balm for the baker’s bruised ego! 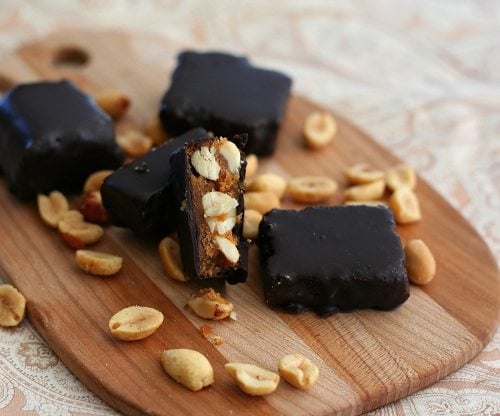 And when my husband arrived home, I showed him my clumpy, lumpy, peanut buttery mess and he, wise man that he is, said “Well, just dip it in chocolate!”.  Give that man a medal, because he not only saved the recipe, but turned it into one of the best low carb treats I’ve ever made.  Seriously!  His words crystallized the idea in my head and I knew exactly what to do.  I cut the whole mess into small squares, popped them in the freezer and then dipped them in 90% cacao chocolate.  And somehow that took them from pretty tasty but seriously ugly to insanely tasty and relatively attractive. Presentable, at the very least!

The whole adventure proved two things to me, both of which I already knew on some level.  First, that every recipe I create, whether it fails or succeeds, teaches me something valuable about my ingredients and how they behave.  Secondly, that peanut butter and chocolate was, is and always will be the best flavour combination ever.  Bar none.
Now, what the heck would YOU call these things???  Because if any of you can come up with a really great name for them, I will send you a batch. 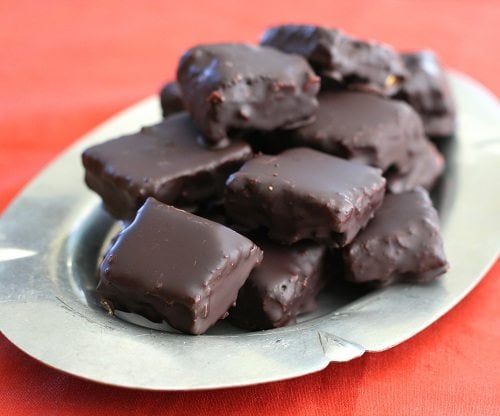 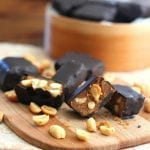 A mistake in the kitchen led to one of the most delicious low carb treats I've ever made. A homemade candy bar packed with peanut butter, caramel and chopped peanuts.
Servings 16 servings