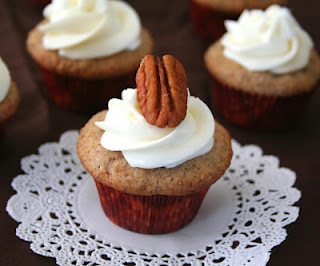 So, I have probably bragged enough about how my husband surprised me a few weeks ago with a night away from the kids.  I won’t keep blathering on about it, except to tell you how this recipe was inspired by that little interlude.  We had dinner at a wonderful place in Boston’s South End called Darryl’s Corner Bar and Kitchen.  Not to make my husband sound cheap or anything, but we were actually using a gift card I’d won quite some time ago at a Boston Food Bloggers event.  I know he would have sprung for a fancy dinner, but I’d had the card for more than a year and we’d never used it.  We simply don’t get a chance to get into the city for date nights very often and this seemed like the perfect opportunity.  We’d heard many good things about the place too, and it lived up to every expectation, so I thought it deserved a shout out on my blog.

Darryl’s specializes in “soul food”, that wonderful comfort-food based Southern cuisine.  Plenty of barbecue on the menu, as well as fried catfish and that very popular combination, chicken and waffles.  We had some great cocktails and started off with the fried catfish strips.  Then I moved on to the BBQ ribs while my husband chose the chicken and waffles.  Nothing disappointed.  Nothing.  Not the food, not the drinks, not the atmosphere.  It was all delicious and a lot of fun.  And since it was such a special occasion, we finished off the evening with a little dessert, the intention being that I would have one little taste and my husband would finish it off.  I let my husband do the choosing and he ended up picking a Rum Pecan Cupcake that was one of the specials of the day.  Except that it wasn’t a single cupcake, but instead four mini cupcakes.  Perfect for me to have one of my own without sending my blood sugars out of control.

If the choice had been mine, I probably wouldn’t have picked this dessert.  But I am glad the choice wasn’t mine, because it was phenomenal.  It was soft and lovely, and offset by a tangy-sweet cream cheese frosting.  The rum flavour came through nicely and I loved the crunch of the pecans.  I knew almost instantly that I wanted to try to recreate this one as a low carb treat.  I figured it couldn’t be that hard.  I would use one of my basic cake recipes, add some chopped, toasted pecans and maybe some pecan meal as well.  In place of some of the liquid, I would add dark rum.  And cream cheese frosting, well that’s a low carb staple so no worries there.

The Results:  First, I will tell you that the flavour was spot-on.  The rum came through without being overpowering and the crunch of the pecans was just right.  And cream cheese frosting is always a favourite with me.  But I will also say that the texture, while quite good, wasn’t quite on par with the cupcakes from Darryl’s.  It is hard to achieve finely textured cakes with nut flours, and I think it might have been the pecan meal.  I might have been better off going with just commercially-ground almond flour to get a finer crumb, as I have managed to achieve in some of my cakes.  Still, these were really quite good.  To my surprise, even my kids really like them, nuts and all.  They tend to resist nuts of all kinds except peanuts, but these got two thumbs up.

It also ended up making a funny amount of mini cupcakes.  It would probably have been perfect for 12 regular sized cupcakes, but mini cupcake pans often mean left over batter.  So in the end, it made 28.  Not that I am complaining, more of these is always fine by me!  If you want to make these into full -sized cupcakes, they will be great but you will need to adjust the baking time accordingly. 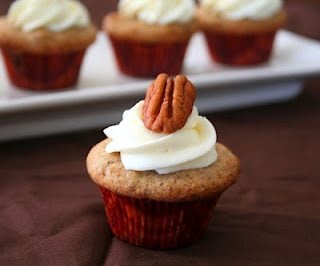 For the cupcakes, preheat oven to 325F and line a mini-cupcake pan with paper liners (you may have left over batter and have to do two batches.  I got 28 mini-cupcakes).

In a medium bowl whisk together almond flour, ground pecans, whey protein, baking powder, baking soda, and salt.  In a large bowl, beat butter and erythritol until well combined.   Beat in eggs one at a time, then beat in vanilla and stevia extract, scraping down beaters and sides of bowl as needed.

Add half of the almond mixture and beat well, then add rum and almond milk.  Add remaining almond flour mixture and beat until well combined.  Stir in chopped pecans.  Divide batter among prepared cupcake tins and bake 15 to 18 minutes or until tops are golden brown and a tester inserted in the center comes out clean.  Let cool in pan.