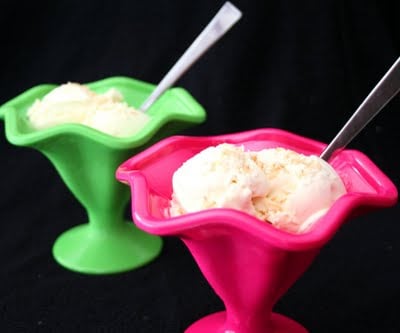 Did you know that July is National Ice Cream Month? Yeah, me neither, until I saw it recently on several other blogs. As always, I am in the dark about these things. There needs to be a centralized database of food holidays and celebrations for us poor, unaware bloggers. It does make a lot of sense for July to be Ice Cream Month – I know I certainly eat my weight in ice cream during the hot months of July and August. But I am not presenting you with a recipe for ice cream. And I am sharing this recipe on Mad About Macarons as a guest post as well 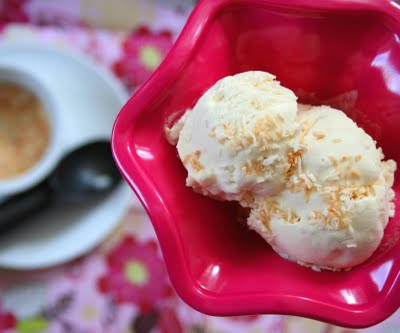 If you haven’t heard about Mad About Macarons, I don’t know what rock you’ve been hiding under. It is the name of both a cookbook and a blog written by Jill Colonna, a Scot living in France, having married a Frenchman (by the name of Antoine…how perfect is that???). She has tackled the world of french cooking and mastered the art of that finicky French pastry, le macaron. And written a whole cookbook devoted to them, no less! 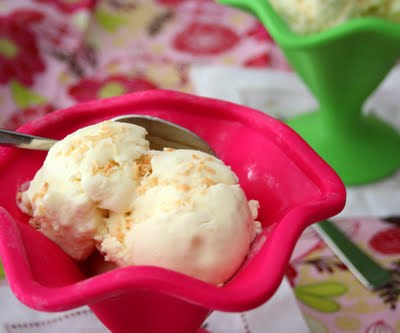 When Jill asked if I would guest post on her blog, I was so thrilled and flattered. Not only is she an amazing cook, she is a delightful person and is incredibly supportive of her fellow bloggers, despite the fact that she could probably outcook and outbake us all. And she has an adorable Scottish accent. Well, I don’t really know about that, but she did use the term “Och” in an email to me so that counts, right? She asked that I create something based on egg yolks. Since it is National Ice Cream Month on this side of the Atlantic, it is only fitting that I created an ice cream recipe. Actually, that is purely coincidental, as I knew nothing about National Ice Cream Month until a few days ago. But I can pretend I was all uber-organized and on top of things, can’t I?

So please head on over to Mad About Macarons and check out Jill’s blog! 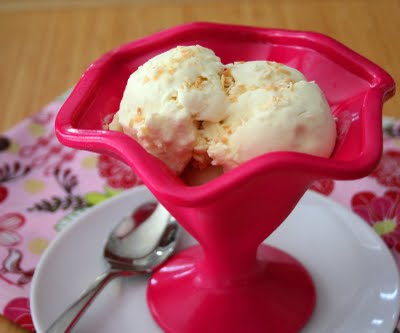 Rum and Toasted Coconut Ice Cream
2 cups cream, whole milk or a combination thereof
½ cup Stevia In The Raw* (or sugar, honey, splenda)
4 large egg yolks
1 cup full-fat coconut milk
½ cup unsweetened coconut, lightly toasted
3 tablespoons dark rum
Set a medium bowl in a large container of ice water.
In large saucepan over medium heat, combine cream and sweetener and cook, stirring occasionally, until mixture reaches 170F on a candy or instant-read thermometer.
Meanwhile, beat egg yolks until light yellow and thickened, about 3 minutes.  Very slowly whisk ½ cup of the hot cream into the yolks to temper them, then gradually whisk tempered yolks back into the saucepan.  Continue to cook mixture, stirring continuously, until it reaches 175F to 180F.  Do not let it come to a boil.
Stir in the coconut milk and toasted coconut.  Pour mixture into the bowl set into the ice bath and let cool 10 minutes, then cover tightly with plastic wrap and chill until cold, at least 3 hours.
Stir in rum and pour into canister of an ice cream maker.  Churn according to manufacturer’s directions until thickened and creamy, about the consistency of soft serve ice cream.  Transfer to an air-tight container and press plastic wrap flush to the surface.  Chill until firm but not rock hard, about 2 more hours.   Serve immediately.
If you will be freezing the leftovers for later use, be sure to let them warm in the fridge or on your counter to make them soft enough to serve.
*Stevia In The Raw is a stevia blend that is meant to be measured cup for cup like sugar.  Pure stevia extract (liquid or powder) is much stronger and a little goes a long way, so sweeten to taste.
215 shares
free email series